Morgan Nicholls' feats of strength are always impressive, and his latest deadlift is no exception. 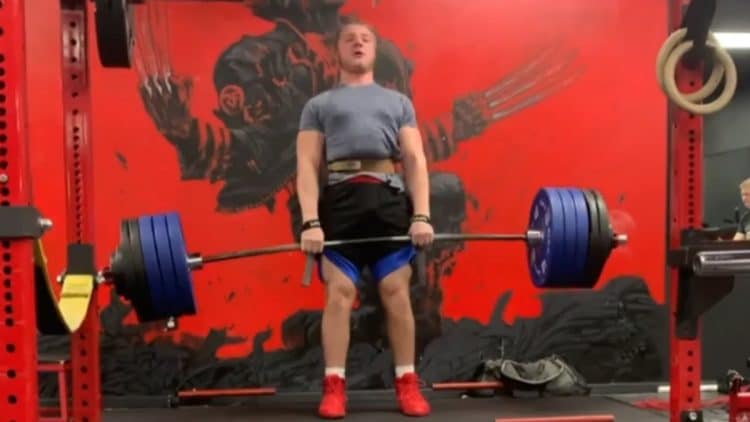 Morgan Nicholls is once again putting up impressive feats of strength, which runs in his genes. Many powerlifting fans have been following this teenager for the past few years, as he burst on the scene at only 12-years-old. Morgan has gotten older, and his lifts have progressed with the years. Now at 15-years-old, he has done a massive deadlift of 238 kg (525 lbs) for three repetitions.

Morgan posted the video on his Instagram account. In the video, we can see him using a lifting belt and wrist straps, accompanied by a conventional deadlift stance. The first two reps went up with insane speed, while Morgan had to pull hard to lock out the third rep.

“Heavy Deads ☠️ today – ended up tripling my max but had to leave a little blood on the platform to get the third one 😂 top set 525×3,”

Morgan is currently playing High School American Football, at running back or middle linebacker position. However, he took part in one powerlifting competition when he was 13. It was the 2020 SPF GP Summer Smash. Morgan competed in the Teen 13-15 division and the 90 kg category. Unsurprisingly, he won the competition.

His current official (done in competition) PRs are:

It should be noted that Morgan has done a lot heavier lifts since then, but he did them in training.

According to him, his current gym PRs are:

We don’t know his current bodyweight, but his Squat and Bench Press PRs from training would be All-Time World Records in the 90 kg category, Teen 13-15 division.

Some of these lifts are so impressive that they seem impossible, but Morgan regularly posts some of them on his Instagram. Just a week ago, he posted a 183.7 kg (405 lbs) bench press double.

His mother, Kim Chizevsky-Nicholls, is also a bodybuilding legend, having won four Ms. Olympia titles (from the year 1996, 1997, 1998, 1999). She is regarded as one of the greatest and most muscular women bodybuilders of all time. In addition, Kim is a part of the IFBB Hall of Fame.

Morgan Nicholls is definitely a strength phenomenon, and even Ronnie Coleman acknowledged his greatness after a 183.7 kg (405 lbs) squat at 12-years-old. To say that Morgan is a talent would be an understatement. If he does compete in powerlifting again, a successful career would be almost guaranteed.

The Rock Gives Tour of His ‘Iron Paradise’ Home Gym