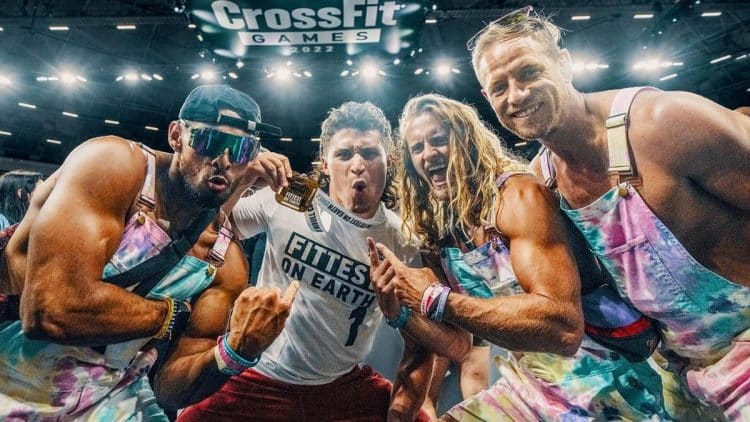 Buttery Bros, who are well-known for their comedy-infused fitness brand, released a documentary-style vlog recapping the 2022 NOBULL CrossFit Games that concluded on Aug. 7 in Madison, Wisconsin.

The YouTube sensations joined forces with five-time CrossFit Games champion Mat Fraser to launch their own supplement company called Podium Nutrition. They had a booth at the event for their company and managed to capture a ton of footage, which included behind-the-scenes and numerous interviews with individual athletes who got done with their workouts.

Fraser is one of the most successful athletes in the sport. He was the first to win the title of the Fittest Man on Earth five times. While he could have continued to compete, he decided to announce his retirement. His partnership with Buttery Bros did rounds online in the CrossFit community. The duo explored a new style of recording when they did a bodybuilder-style workout video with Fraser, covering back and bicep work.

Heber Cannon and Marston Sawyers were present at the competition for all five days.  In a video posted on their YouTube account, they provided an insider look into the 2022 CrossFit Games.

Their first interview came after Event Two (A and B), “Shuttle to Overhead,” where they spoke to Jeffrey Adler, who had won the jerk portion of the event.

“If the bar is not moving, you’re too slow. I almost didn’t work on the last set, but that’s where I was winning the workout or losing it.”

He scored the most number of jerks after performing a run of evolving distance over three rounds. Adler has proven his dominance with a barbell, having won the 2022 Atlas Games Semifinal to qualify for the finale.

Ricky Garard talked to the Buttery Bros after his win at Event Five, “The Capitol.” Garard described overcoming the challenges of the grueling nearly hour-long workout.  Upon hearing his competitors breathing heavily, Ricky knew he could win the event. He gave it his all to maintain the lead and eventually won the event.

The 2022 NOBULL CrossFit Games offered a sum of $2.8 million in total payouts across every division, making it the highest offering in its history. Justin Medeiros edged out Ricky Gagard to come out on top in Men’s division. Tia-Clear Toomey made history by winning a record-breaking sixth title in the women’s division. CrossFit Mayhem Freedom led by the legendary Rich Froning dominated their competition to win in the Teams division.