See everything Mat Fraser ate when he trained and competed in CrossFit. 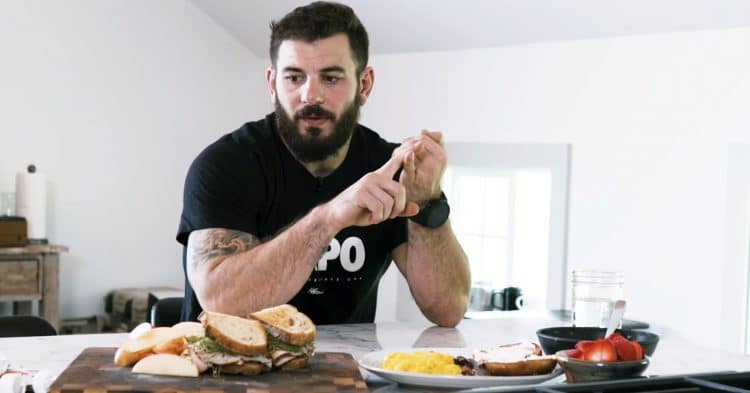 Mat Fraser is the winningest champion in CrossFit Games history with an unbelievable five titles (2016-2020) to his name. While he’s a genetic freak, his training and diet played a big part in his success. Recently on his YouTube channel, Fra5er, he and his wife Sammy Moniz, founders of Feeding The Frasers, discussed everything he ate during his training and competition days.

Let’s just say, it brought back some unpleasant flashbacks seeing as someone of his caliber had to eat a crap ton. Now, that’s he’s retired from the sport though, he’s thankful his diet isn’t anywhere near as brutal.

Fraser has kept busy though following his 2020 CrossFit Games victory. He now does a podcast with fellow competitor Josh Bridges and film creator Sevan Matossian. Then, of course, he has to keep up with Feeding The Frasers and his supplement brand ‘Podium®’ of which he’s bringing to the market with the Buttery Bros – Heber Cannon and Marston Sawyers.

Additionally, he’s partnered with Stefi Cohen and Hybrid Performance Method to coach through his HWPO program.

Anyhow, let’s talk about what the champ ate during his peak performance days.

Below we’ve included the various foods and meals that Fraser would eat for training and competition. You’d be surprised at what it takes to be a five-time Fittest Man on Earth.

Fraser made it clear that he hates eating real food for breakfast. “I hate, hate, hate it“.

So he’d eat yogurt, granola, berries with coffee because it was sweet and much easier to get down rather than having to chew more dense foods and feel sickeningly full afterward.

It was just something to get in his stomach. But many days, it was enough to fuel his first training session, although sometimes it depended on how his day was structured.

About an hour or so after the first meal, he’d eat a bagel w/ cream cheese, eggs, bacon, and strawberries. He did talk about how amazing the Trader Joe’s Black Forest bacon was which surely helped him get it down even though he despised having to eat a full breakfast.

Fraser also expressed his hate for feeling full throughout the day and said he would’ve taken in all of his calories after 8 P.M if he could’ve.

The third meal was a hefty Turkey, cheese, and avocado sandwich and apples of which he said gave him anxiety because he associated it with long, hard training days.

So he’d sip the protein shake during training and have Gatorade after the most intense part of his training. He’d have two-three Fuel For Fires per session and one after each metcon session (metabolic conditioning training).

Mat would eat the gummies during strength training so like in between sets of squats and he’d have two to three packs per workout. As for the Snickers, if he did a zone 2 session, he’d scarf down a fun-sized bar every 10 minutes.

Well, if you’re curious to know how many Snickers that was (as were we), a Zone 2 workout could last 60-90 minutes. His Zone 2 sessions usually consisted of the Concept 2 BikeErg at more than 80 RMPs, low damper, and heart rate at 155.

Sammy described meal four as a “giant plate of food and a chore”.

“I tried to eat as few bites as I could until I was fully done training for the day, and then it was like ok now I’m OK with having a full stomach.”

He’d eat this meal after his second training session and it usually consisted of steak, vegetables, and usually a “mountain of white rice”.

He mentioned trying to adjust to eating normally again after the CrossFit Games but it was just too much food for him.

Moniz jokingly explained that when they’d have guests over for dinner she’d tell them not to feel bad if they couldn’t finish because she was so used to “Mat-sized” servings.

Mat says his serving of rice now is “so cute” compared to what he used to eat.

For meal 5 which wasn’t too long after meal 4, Mat would consume a very large bowl of mini wheats with whole milk for lots of calories.

If he was watching TV he’d eat peanut butter and jelly/banana because it was simple to prepare if Sammy was asleep. Although, she did remind him that she stayed up with him until 10 P.M. most nights.

But Fraser would wake up in the middle of the night sometimes and he’d eat chicken tenders or something else because he couldn’t sleep on an empty stomach.

So the aforementioned nutrition was for training but not a whole lot changes for competition.

“You try and make as few changes as possible from training to competing,” he explained.

Although, Fraser would eat a little less per meal but more frequently because he said you never want to have a full stomach when competing,

The breakfast was pretty much the same. He’d have less turkey in the sandwich on more of a hoagie roll that was a lot of carbs and he still ate the apples for a fast-digesting carb source. The goal was to keep carbs up during this period.

What he said next was pretty funny but he’d upgrade to the king-sized snickers and quickly toss the wrappers so no one would see. Occasionally he was questioned about it but he’d play it off and say it was a protein bar.

According to Moniz, they’d cut out dairy about 5-6 weeks prior to major competition. So it’d be almond milk, dairy-free yogurt, and dairy-free cream cheese.

For the most part, Fraser still had whey protein although that changed this last year when he started taking a vegan protein. Moniz explained that from what they learned, dairy can cause inflammation so they made the changes to hopefully reduce a little of the stress on his body.

They also went gluten-free to hopefully improve his digestive health as he was having issues at one point. However, it was stress and anxiety, not the gluten, that caused it.

How Mat ate when he first started

Mat Fraser first started competing in 2012 but his diet wasn’t too great. He only weighed 169 lbs at his first competition and Moniz jokingly teased he was just a baby.

“I didn’t eat. I was doing a lot of manual labor and eating was just a nuisance.”

He also developed some not-so-great habits when he started school as he’d eat Chinese food and pizza from food trucks.

On top of his poor eating habits, Mat said he wasn’t the happiest person. So his mom sensed that and would make sure to treat him well with racks of ribs from Costco and a pint of Ben and Jerry’s ice cream nightly.

To fuel the fire, Sammy brought up the Hungry Man, microwavable dinners that also came with a dessert in one of the compartments.

He’d sit in a La-Z-Boy, watch TV, and enjoy his premade dinners. But eventually, his eating habits caught up of which he gained a lot of weight.

He started at 169 lbs and ballooned up to 203 lbs about four months later.

In 2012, Mat Fraser competed at the East Coast Championships with his poor diet, 203 lbs of raw power, and all, and he was up against 11 CrossFit Games athletes that year.

He said that they were expecting one of the other competitors who were more established in sport to win the event. However, he ended up winning like 4/5 events. Not to mention, the man who ran Paleo Power meals offered to send him meals after Mat told him his diet was Chinese, pizza, and Hungry Man meals.

So Mat got pallets of food (before they started doing individual meals) and felt great to have that luxury.

Mat Fraser explained that he started working with Ben Bergeron who told him he had to stop eating Ben and Jerry’s despite him being his best athlete.

“You should be telling your other athletes to eat like me because I’m ranked higher.”

So, knowing Fraser, he wanted to show Bergeron that he could out-train a bad diet.

But after an underwhelming 2015 season, he had to change up some habits to ensure that didn’t happen again.

However, he went too far in the other direction, not having adequate nutrition to support his training, and this affected his performance and how he felt.

Thankfully, Sammy helped him get back on track with her homecooked meals and good influence on his habits.

Fraser’s eating regime has changed a lot since his retirement from the sport of CrossFit and he couldn’t imagine having to eat so much food again.

“If I ate this right now, I would be on the floor in the fetal position, a, having a sugar crash, but then b in just so much pain. Now, I eat a fraction of this.”

He’s cut down on so much food that he’d say he probably eats at a maximum, half of what he used to. And then take out most of the treats he used to eat too which was a lot.

After seeing what Mat Fraser had to endure to reach the top of the CrossFit podium a record number of times, it’s no wonder he’s relieved to not have to shove so many calories down his gullet.

Will he compete again? Who knows but it wouldn’t be the first instance.

You can watch the full day of eating video below.