"Eventually, I got up to 5,000 calories a day" - Jeff Seid reflects on his bulking diet which led to a 40-pound weight gain. 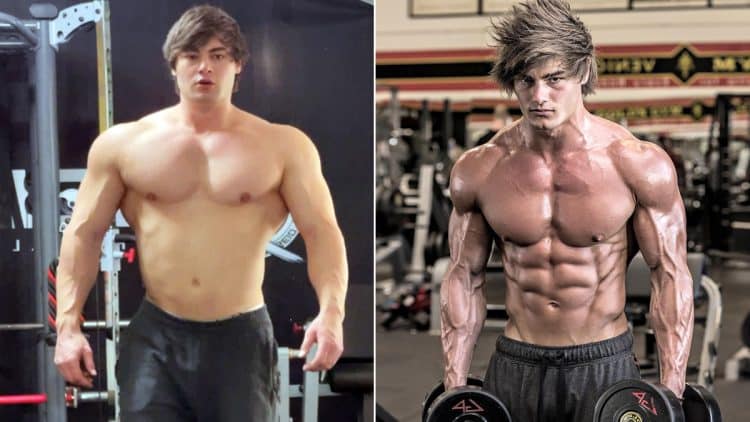 In addition to leading a successful career as a model and social media influencer, Jeff Seid performed exceedingly well during his years competing as a bodybuilder. Seid took to Instagram recently to warn his followers about the dangers of “dirty” bulking diets after gaining 40 pounds in six months.

Jeff Seid holds the distinction of becoming the youngest American IFBB Pro bodybuilder in the league. He competed in the Men’s Physique category and reached the Olympia stage a handful of times. During his time competing, Jeff was respected for his consistency and strength of schedule.

Seid competed at six events in 2013. One of his best showings came in second place at the Tampa Pro. Jeff won gold at the Valenti Gold Cup months later before taking his physique to the biggest show of the year, at 2013 Mr. Olympia, where he placed 11th.

Before stepping away from the sport, Jeff Seid attempted the prestigious Olympia contest one more time, but was unable to improve on his performances prior after finishing 16th. While he hasn’t competed in quite a while, that hasn’t stopped Seid from maintaining a contest-caliber physique. However, the pro revealed recently that his latest bulking diet did not go according to plan.

Jeff Seid: ‘I Got Fat Because I Dirty Bulked’

In a recent Instagram video, Jeff Seid reflected on the bulking diet that led to him getting fat.

“I got fat and the reason why I got fat is because I dirty bulked. Now, a dirty bulk is when you eat everything in sight to put on as much size and weight as possible. But there is one dilemma, I put on a lot of fat. I bulked for six months.

For the first four months, I was pretty clean. I was very strict with the diet. I gradually was increasing the calories as my weight was going up and I wasn’t really gaining much fat, it was mostly muscle, and it was a pretty good time.” Jeff Seid explained.

While he acknowledged a “clean” diet was working for the first four months, Jeff says things got out of hand when he started eating around 5,000 calories daily.

“Eventually, I got up to 5,000 calories a day. That’s when I was eating every single day. The last two months of the bulk, I liked seeing the number on the scale just go up, up and up. So, I decided let’s fuc**ng eat everything. Let’s get huge. It’s time to dirty bulk baby. I stopped doing cardio and started eating everything.

I put on size. I got up to 232-pounds, so I actually gained 40-pounds from the beginning of my bulk till the end of my bulk. It was actually a lot of size to gain in six months. It’s about 6.6-pounds a month. I’ll be honest with myself, I know it wasn’t a lot of muscle I gained, it was a lot of fat.” says Jeff.

Given the trim build Jeff sports year-round, many were shocked to see the fitness influencer putting on so much weight. He warned others of the diet and said he burned the new muscle he got from bulking in order to shed off the extra fat. As a result of the “dirty” bulk diet, Jeff explained that his blood pressure skyrocketed.

“I had to shred extra hard to lose the fat. Unfortunately, I also lost a lot of the newly built muscle I gained from the bulk; I lost it shredding all the fat. The reason why I had to stop the bulk and the number one reason why the dirty bulk isn’t good is because it’s unhealthy. What happened to me personally is my blood pressure went through the roof.”

Jeff says if you’re going to bulk, make sure to bulk responsibly. He advocated for cardio training and eating ‘fairly’ clean. In addition to proper diet and sleep, Seid suggests getting adequate rest because that’s what enables the body’s muscles to recover.

“My advice to you, do not dirty bulk. You need to bulk responsibly. Increase your calories gradually as your weight goes up. Keep doing cardio. Jeff added. Eat fairly clean. Most important thing: keep your calories in a surplus and getting good sleep, good rest, and rest means not training. You need to recover.”

In the end, Jeff Seid would not recommend the “dirty” bulking diet to anyone.

“Don’t just focus on the scale and weight. Look in the mirror. See how much fat you’re gaining. If you’re gaining too much fat and not enough muscle, it might be time for you to start shredding and end the bulk. Would I recommend dirty bulking to you? No, I wouldn’t.”

After gaining forty pounds over a six-month period, Seid warned of the potential dangers associated with dirty bulking. Seid’s biggest takeaway from this experience was encouraging people to bulk responsibly because otherwise it can result in adverse health repercussions.