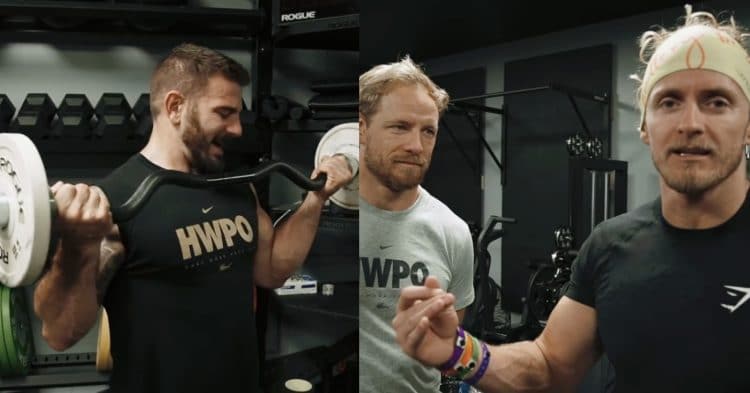 When it comes to physical fitness, few people have a grip on things like five-time CrossFit Games winner Mat Fraser. He recently teamed up with CrossFit’s Buttery Bros, Heber Cannon and Marston Sawyers, for an intense back and bicep workout.

Fraser has done it all when it comes to the world of CrossFit, becoming the first athlete to win five Games. He truly seemed to be unstoppable before he decided to walk away from the sport last year, paving the way for a new Fittest Man on Earth to be crowned.

Another part of the CrossFit community is the Buttery Bros, who started a YouTube channel to give documentary style content for the sport. However, they teamed up with Mat for a video on his channel, where they hit the gym for a bodybuilder style workout, doing back and bicep work.

The video started out though, with Mat Fraser, Heber Cannon, Marston Sawyers, and Sammy Moniz all worked together for a workout plan that they were going to follow for this session. It goes as follows:

While hammer curls were on the lineup, Fraser said that he was having some issues with his forearms, so he would passing up on that portion. Nevertheless, with a plan in place, and some preworkout downed, they set off to work.

Mat Fraser and the Buttery Bros Get To Work

From the moment that the workout began, the intensity was felt through the screen. Fraser and the Buttery Bros were helping to push each other through the sets, all while having a good time, and even calling out bodybuilder Kai Greene.

With these being mass building exercises, Fraser was able to give them some pointers on some proper form with some of the workouts. This way the men can get the most of each exercise by opening up all of their muscle groups.

The best part about this intense workout was that it was done at the crack of dawn, before Mat Fraser and the Buttery Bros had breakfast, so after it was all said and done, they got to cool down with a meal prepared by Sammy. This was a fun collaboration between some of the most fit people in the world.