How many calories burned while playing Ping Pong or Table Tennis? 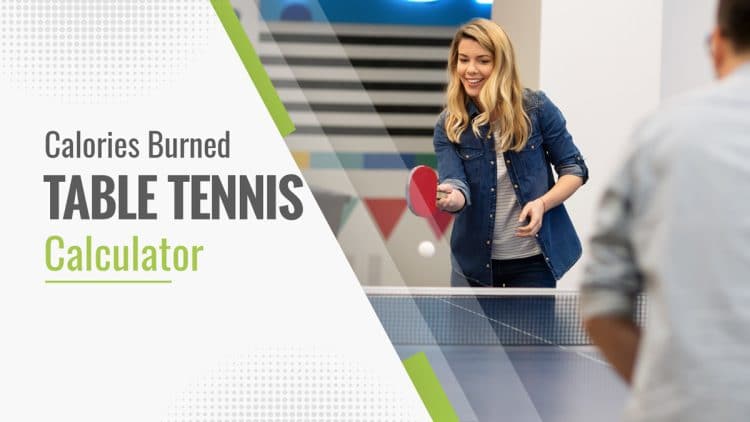 The average person weighing 180 pounds burns 343 calories per hour playing table tennis or ping pong, the total calories burned depends on the your weight and the intensity of your activity.

While not as popular as some other sports played around the world, table tennis is being played by more and more people each day. The low barriers to entry and the ability to burn calories make playing table tennis a fun activity for everyone.

Sometimes referred to as ping-pong, table tennis is a game that is usually played indoors and typically involves two or four players on opposite sides of a regulation-sized table competing against each other in teams.

The great thing about table tennis is that you can play all year round since it’s typically played indoors.

Table tennis can also be a very intense game with plenty of moving, sprinting, diving, and running, which makes this activity ideal for anyone that is looking to burn calories while playing a fun game with friends or family.

Our calculator uses MET values to give you an accurate estimate of how many calories you can expect to burn while playing table tennis and doing other activities. The higher the MET value, the more calories you will burn.

MET stands for metabolic equivalent of task, and MET values allow us to give you an estimated expenditure of energy for many different activities, such as playing table tennis.

So a MET value of 1 is the equivalent of the amount of energy you expend while at rest, and a MET value of 3 means you are expending 3 times as much energy compared to being at rest.

The formula that our table tennis calculator uses to determine the number of calories burned per minute is (MET  x  bodyweight in Kg  x  3.5) ÷ 200.

A person weighing 180 pounds will burn approximately 336 calories per hour from playing table tennis. This activity has a MET of 4, which means that it burns 4 times as many calories as you do at rest.

This is what the formula for calculating the calories burned while playing table tennis will look like for a 180-pound individual at a MET value of 4.

What is Table Tennis?

As we mentioned before, table tennis can be a very intense game that is played between two or four people. There are many instances where you may have to use a significant amount of energy to dive for a ball or run across the table to hit the ball back legally.

The sport of table tennis dates back to the 1870s in Victorian England, where British military officers played the game while stationed in India [2]. The sport was then later developed in the 1900s when advances in the material of ping pong balls and paddles were made, which allowed table tennis to be played by more people around the world.

Table tennis then became an official sport in 1926 and has been governed by the International Table Tennis Federation (ITTF) ever since.

Table tennis has also been an Olympic sport since 1988 and there are several different event categories for athletes participating in the table tennis sport [3]. Popular events at the Olympics for table tennis include men’s and women’s singles and doubles.

What Muscles Does Table Tennis Use?

While some may think of table tennis being a relatively sedentary sport that doesn’t involve much moving, table tennis will actually use a variety of different muscle groups to play the sport successfully and especially at higher levels.

The main muscles that are used when playing table tennis include:

Common movements involved while playing table tennis include using your upper body to hit the ball back and also diving using your lower body in an effort to extend and return the ball onto your opponent’s side of the table.

Other scenarios in table tennis may require you to jump high in the air to return the ball and also involve other similar movements.

Since table tennis can be a great exercise that can burn a significant amount of calories, there are certainly benefits that come along with playing the sport.

As with any exercise, if you’re burning calories while performing an activity, this will allow you to lose weight and body fat if you consistently remain in a caloric deficit.

Table tennis is also a very low-impact exercise, meaning that playing table tennis for long periods of time will typically have no negative effects on your muscles and joints. Therefore you can play table tennis for fun or competitively as often as you would like and have a very low risk of injury.

Table tennis is also a great exercise to improve your hand-eye coordination. The table that is used in the sport is relatively small and can be hard for beginners to return the ball if they don’t have much experience playing table tennis.

The sport of table tennis can also be a great cardio workout if you play competitively. Competitive table tennis players are skilled enough to make it difficult for you to return the ball onto their side of the table.

This means you will likely be running from side to side to try and hit the ball back onto the table, which will increase your heart rate and allow you to burn calories in the process.

The last major benefit from table tennis goes beyond just physical aspects. The sport can be very social and encourage you to meet new people while playing a fun and energetic sport.

There are many different table tennis leagues that you can join in with friends to meet other people with the same interest in exercise and playing table tennis for fun or competitively. You can also enter into tournaments in singles or doubles events with your friends or family members.

In order to play table tennis, there is a fair amount of equipment that is required to play the game. Unlike activities like walking, running, or stair climbing, table tennis equipment can be expensive and also can take up a lot of space.

The most common equipment that is needed to play table tennis includes:

Some competitive players will also invest in high-quality shoes that make it easy to switch directions quickly in order to enhance their playing ability.

Some other common equipment that professional players may use are sweatbands, heart rate monitors, and tape for the paddles for a better grip.

Is table tennis a good exercise?

Yes! Table tennis can be a great exercise whether you are playing competitively or just for fun. It will always require you to use quick movements while also working your upper body as you attempt to hit the ball back to the other side of the table.

What are some exercises I can do to become better at table tennis?

How often can you play table tennis?

As we mentioned previously, table tennis is typically a very low-impact exercise that doesn’t result in many injuries when played correctly. Because of this, you can play table tennis as often as you would like without experiencing any negative side effects.

What is the difference between table tennis and ping pong?

By now you know that table tennis can be an enjoyable sport that can help you burn plenty of calories in the process. Table tennis can also be played at a competitive level or at a leisurely pace with friends.

The benefits of playing table tennis also go beyond just the physical aspects, as table tennis can also be a social activity and allow you to meet other people that also enjoy playing the sport.

Use our table tennis calculator to get an idea of how many calories you can expect to burn while playing, and be sure to check out all the other calculators that we have to offer at Fitness Volt!