How many calories do you burn with Tai Chi? 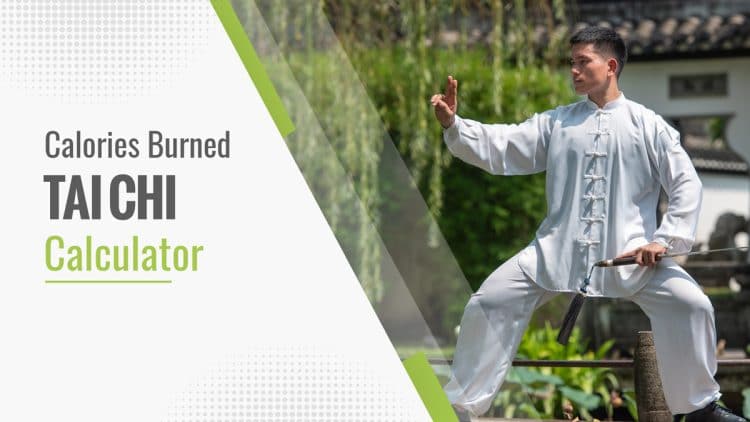 The average person weighing 180 pounds burns approximately 129-257 calories per hour practicing Tai Chi martial arts. Tai Chi is a very Zen exercise that allows you to get healthy while also centering yourself to bring you inner peace. It all began with a Chinese tradition based in martial arts, and it involves deep breathing and slow movements.

It’s the epitome of the mind-body experience. A lot of people assume that yoga would be the first choice, but you can’t beat the Tai Chi experience. The practice has been around for centuries, and so has many health benefits.

The art of Tai Chi has become even more popular over the years. It’s considered a gentle workout and one that all ages, including seniors, can be part of. Bringing in the art of Tai Chi into your life will help you to become calm and centered.

How To Use the Calculator

Using the Tai Chi calculator to determine how many calories you’ll burn is very easy to do. In order to calculate the number of calories that you’ll burn, just input your weight and the time that you’ve spent or plan to spend practicing Tai Chi. Then select the intensity that you’re practicing Tai Chi and hit “CALCULATE.”

Our Tai Chi calculator uses MET (metabolic equivalent of task) values in order to find out the number of calories that practicing Tai Chi will burn for you. This value is determined by a convention of 3.5 mL of oxygen per kilogram of each minute while doing the specific activity [1].

The calculator has pre-set levels corresponding to the intensity that practicing Tai Chi gives you. So using this calculator will give you a realistic idea of how many calories you will burn while practicing the art, whether it’s general effort or really light effort.

Using MET to determine your body’s energy output is what this calculator is used for. A MET value is the number that determines the energy it takes to perform various activities, such as practicing Tai Chi at different levels of intensity. The MET value is the ratio that shows the relationship between your active metabolic rate to the resting metabolic rate.

The active metabolic rate (AMR) determines the calories that you continue to burn throughout the day. In contrast, the resting metabolic rate (RMR) measures the number of calories you burn when your body is at rest and not actively digesting.

Our Tai Chi calculator’s formula to determine the number of calories burned per minute is (MET  x  bodyweight in Kg x  3.5) ÷ 200.

An individual weighing 180 pounds will burn approximately 257 calories from practicing general Tai Chi at a casual intensity. This activity has a MET of 3, which means that it burns 3 times as many calories as your resting metabolic rate.

This is what the formula for calculating the calories burned while practicing Tai Chi at a casual intensity will look like for a 180-pound individual:

Tai Chi at a light effort has a lower MET, which is at 1.5, being the least amount of effort that you can perform. This time, we will calculate the number of calories burned per hour for a 180-pound individual practicing Tai Chi with light effort.

What is Tai Chi?

The Chinese martial art technique known as Tai Chi is often used as self-defense training and moving meditation. The practice of Tai Chi is supposed to be performed in a slow manner as you breathe deeply.

The act of Thai Chi is about slow motions, but also that everything you do is in flow. So each movement is to flow from one technique to the next, allowing your body to be in one long, constant motion.

If you attempt a Tai Chi class, you will likely start with a 2-5 minute warm-up which gets your joints or muscles loosened up. This will include shoulder rolls and head rolls and opening exercises like ankle and hip circles.

Tai Chi exercises can help you to lose unnecessary weight. Since Tai Chi involves many different types of movements, it can be very beneficial in burning calories, allowing you to lose weight just by practicing the movements.

If you have feelings of anxiety or depression, Tai Chi can be the best thing for you. There is also a positive effect on the nervous system when you take those slow, mindful breaths and move your body slowly, it creates mood-boosting hormones in your body [2].

Just like anxiety, Tai Chi can be a great relief for people who are stressed out. The benefits that people found were much like those of going to the gym. Researchers believe that Tai Chi is a superior form of exercise because of the focused breathing and meditation [2].

It’s a very accessible form of exercise that anyone can participate in and it has the added benefit of reducing stress in your life. It’s also considered to be an inexpensive and safe means of getting exercise.

Studies have shown that young adults who suffer from anxiety found that after a few weeks of taking Tai Chi, not only was their anxiety reduced, but their quality of sleep also improved. It’s not just improving sleep for young adults either, adults are finding that they are getting a better night’s sleep with just a few sessions of Tai Chi.

Older adults have found that they have improved cognition after practicing Tai Chi. It’s been found that Tai Chi can improve executive functioning skills like carrying out complex skills and paying attention. It’s also been found to enhance memory in older adults.

Fibromyalgia symptoms can be excruciating, and people who suffer from it don’t always get the relief that they need. However, studies have shown that people who consistently practice the art of Tai Chi have found a decrease in their fibromyalgia symptoms [3]. The greatest results were found with people who had practiced Tai Chi for more than 52 weeks.

What is better, yoga or Tai Chi?

Both are equally awesome. Yoga does help to strengthen and tone your body as well as help with your cardio and respiratory health. When both are broken down, their benefits are almost identical.

Can I teach myself Tai Chi?

Tai Chi is known to be one of the best practices in martial arts. If you are unable to go out and take a class for Tai Chi, you can certainly practice it at home. There are videos that you can purchase or take out from the library. You can also find tons of resources on YouTube to help you learn the fine art of Tai Chi. It can be added to any exercise routine or training program.

What diseases does Tai Chi help with?

There are so many benefits to practicing Tai Chi, including improving stability and balance. Older people who are suffering from Parkinson’s disease found that after practicing Tai Chi, they had a reduction in back pain. People with osteoarthritis had a reduction in knee pain, and the lives of people with cancer, heart disease and other chronic illnesses were improved.

How often should you do tai chi?

There are virtually no disadvantages to practicing Tai Chi. That’s why it’s safe and recommended to practice Tai Chi a little bit every day, ideally for at least 10 minutes per session. However, you will get the maximum benefit from practicing Tai Chi for longer periods of time.

Tai Chi is not only a relaxing and fun way to exercise, but there are so many amazing benefits to practicing it. Whether you are practicing Tai Chi with light effort or general effort, you can burn a significant amount of calories.

It is an exercise that is growing in popularity because it not only helps physically but mentally as well. Moreover, the exercise can be practiced by both young people and seniors.

Be sure to check out all of the other calculators that we offer to get an idea of how many calories you can burn while doing any activity!