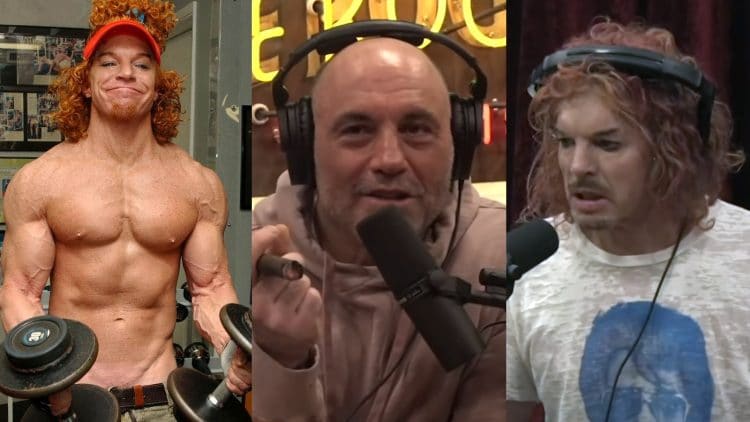 Carrot Top wasn’t always around 140-pounds as the actor and comedian revealed recently on an episode of the Joe Rogan Experience. During his time spent in Vegas around 15-years ago, Carrot Top attained a significant amount of muscle and believes his 3-hour sessions in the gym were the catalyst for the body transformation.

With a plethora of Film/TV appearances, Carrot Top has long been a staple for the theatrical side of life. In fact, it was at a Vegas gig, 15-years ago where Carrot Top found the time to train 3-hours a day. Standing at 5-foot-9-inches, Carrot Top detailed how he managed to gain all the muscle despite seemingly weighing around 140lbs nowadays.

Carrot Top Divulges To Joe Rogan How He Bulked Up

Speaking on the Joe Rogan Experience, the renowned comedian described the work it took to gain upwards of fifty pounds at the time.

“What got me jacked? I just, well I’ll tell you what I did. It was when I got that permanent gig. I had nothing to do all day in Vegas literally. So I started just going to the gym every day. Like I’d go three hours a day literally. Well, this is again, fifteen years ago and I just was huge and one day I went to my warehouse to do something.

READ: YouTuber Derek and Joe Rogan On The Dangers Of Bodybuilding As You Age

After Joe Rogan asked Carrot Top how he was able to gain so much muscle, the comedian admits that it was mostly hard work and consistency. Even Carrot Top himself was surprised 15-years ago after seeing the dramatic transformation his body went through.

With an abundance of time spent in Vegas, Carrot Top concedes that there really wasn’t much to do while staying in ‘Sin City. The muscle Carrot Top gained years ago has piqued the interest of the many people who make up Joe Rogan’s massive YouTube channel, which holds over 11.5 million subscriptions.