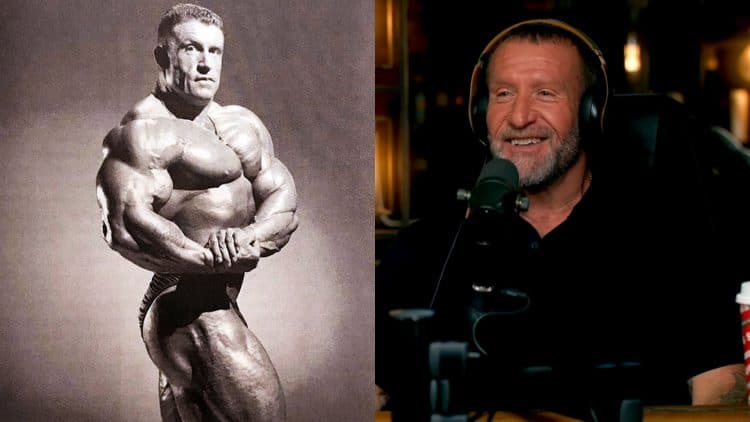 Bodybuilding legend and six-time Mr. Olympia winner Dorian Yates cautions the younger generations about the dangers of steroid use. During his recent visit to the True Geordie podcast, Dorian Yates spoke about steroid use and its long-term effects in different contexts. Yates has not opposed steroids as the means of staying healthy for older men. However, he has a different opinion on the rampant steroid use among young people, especially those who are not competing athletes.

Considered as one of the greatest bodybuilders in history, Dorian Yates scored six consecutive Mr. Olympia wins from 1992 to 1997. Best known for his wide and thick back, Yates holds wins in 15 major competitions and to second-place finishes. His six Mr. Olympia wins are fifth-most in bodybuilding history behind Lee Haney (8), Ronnie Coleman (8), Arnold Schwarzenegger (7), and Phil Heath (7). Since his retirement, Dorian Yates has spoken about the downside of steroid use in sports.

In the past, Dorian Yates has admitted to having used steroids consistently for 12 years from 1985 until he retired from professional bodybuilding in 1997. While using steroids and other substances helped him in his pro career, Yates has admitted that he faced some side effects as well. During his discussion on the True Geordie podcast, Yates explained the long-term effects of steroids with an example of Insulin.

People use Insulin in medical contexts. However, bodybuilders use it so that muscles can absorb more nutrients. Dorian Yates said that the long-term negative effects of this heavily outweigh the short-term gains and added that Insulin, in combination with other substances is more likely to take decades off of the user’s life.

“I tell the people that I coach and help now and I advise. I said, ‘look. I’m always honest and I tell you the truth. Yes, I used Insulin.” Was it positive? In my mind, no it wasn’t because you would start to lose a little bit of quality. Not to mention the negative health effects. Diabetics that use Insulin, I think they have like ten years less life expectancy. So if you’re using Insulin and steroids and other things altogether, they’re becoming a ticking time bomb,” Dorian Yates said.

The purpose of bodybuilding is to celebrate healthy living and strengthen the body. However, many bodybuilders have passed away at a relatively young age over the last few decades. Dorian Yates highlighted this and said:

“You’re body can’t tolerate this kind of stress as you get older. So we’re seeing heart attacks and stuff with bodybuilders now in their 40s and 50s. It’s always happened since the 90s. There have been a few guys.”

Dorian Yates raises concerns over increasing steroid use among non-competitors

Steroid use comes with great incentives for people in the fitness, sports, and entertainment industry as it enables them to perform their jobs better. However, a large section of young people and even school-going children are believed to be at least exposed to their use. It is also a noteworthy fact that the risk of using steroids outside professional reasons comes with a great risk with minimal or no benefits in the larger context.

Dorian Yates stated that steroid use has not only increased among people that don’t even compete, but they’re using higher doses than even professional bodybuilders used back in the 1990s.

“We were using Trenbolone in the form called Parabolan. It came from France in 76mg. I’d probably use two of those a week. Two or three were accepted back then. That would be the maximum, so around 200mg because it’s really powerful and a little bit toxic. Guys are coming to me now that don’t even compete and say, ‘I’m on 800mg of Trenbolone!”

The 59-year-old further stated that steroid use is increasing with each generation. Yates argued that although it helps with recovery and gains initially, there comes a point when they don’t add any value.

“I think each generation of bodybuilders is pushing the chemical envelope a little bit more, a little bit more… What I am told by people that compete or even don’t compete, they’re just taking it recreationally. I said mate, you’re taking more than I took for Mr. Olympia. You don’t need that.”

“You’re getting the benefit that you want. The recovery, the muscle building with trying to minimize the negative effects. There is going to be a point when you’re not really getting any positive effects anyway. It’s like a glass of water. Once it’s full, it’s full,” Dorian Yates said.

Dorian Yates’s comments might make one think that he is a staunch opponent of steroids irrespective of the circumstances under which they’re used. However, that is not the case. Yates explained that steroids or Testosterone Replacement Therapies (TRT) are a great way for older men to lead a healthy life. His sole objection with steroid use is aimed at the young generation that resorts to it as the means to make gains and athletes who take more steroids than recommended by medical experts.

“Depression, arthritis, diabetes, heart problems… All these things can be improved by taking Testosterone replacement. So, in that context, it’s very healthy for people.”

Courtesy of the True Geordie Xtra YouTube channel, you can watch the full video here: