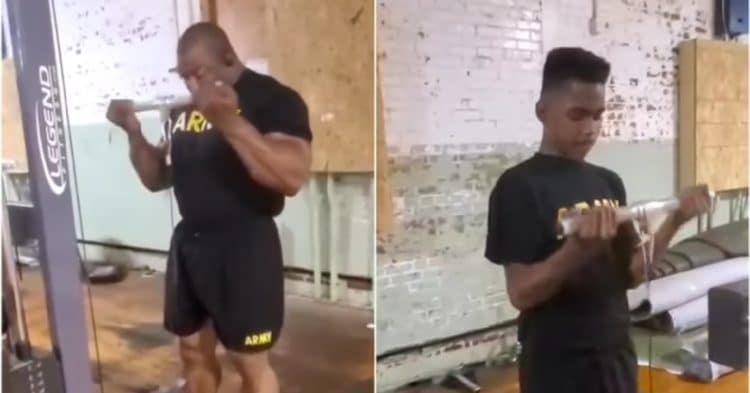 Arnold Classic champ Cedric McMillan has his hands full with a lot of different ventures. However he recently showed some insight into his personal life, by sharing a video training alongside his son.

When 42-year old McMillan is not taking to the bodybuilding stage, he is busy serving his country. Throughout his bodybuilding career, even when he was winning shows and competing at the Olympia, he has been serving as a member of the U.S. Army. Nevertheless, this has not prevented him from having a ton of success over the years, earning respect as one of the most physically gifted athletes in the sport.

Another busy aspect in the life of Cedric McMillan is the fact that he has four children, as well. However he recently shared a moment between he and his son, where the athletic part of his life collided with his personal life. A post to his Instagram, sees him hitting the gym alongside his son, as the pair film each other doing cable curls, lat pulldowns, and machine calf raises.

“This is my teams last week working together before our mission changes. I was able to bring my son to work, so we worked out together… more like video’ing each other, just like what I hate to see people doing in the gym. I love seeing his little body develops. I hope he never had the weaknesses i do”

It is sweet to see McMillan and his son working out together. The two are clearly beginning to bond over fitness, which is always exciting to see. We have seen plenty examples of how a bodybuilding parent can lead to a super successful second generation of athletes.

It has been a while since we have seen Cedric McMillan compete, but he never ceases to be exciting when he steps on stage. Seeing this tender moment does make you wonder how his son may look following in his footsteps in the years to come.

Big Ramy Reveals He Will Not Be Competing Again Until 2021