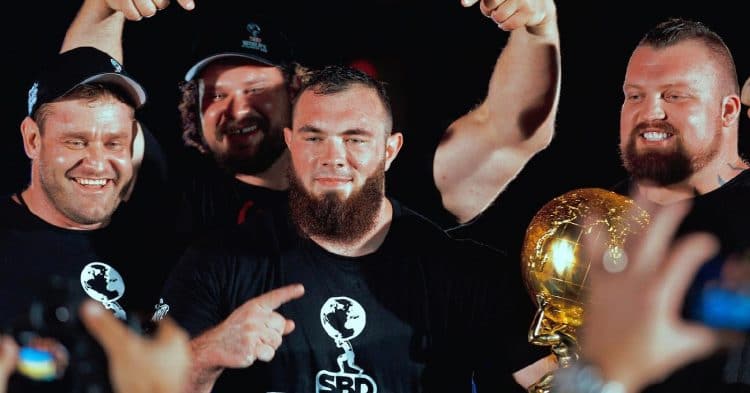 The 2020 World’s Strongest Man saw the ascension of a new generation, as Oleksii Novikov won at just 24 years old. Now some of the pillars of the previous generation have offered their congratulations and support of his massive achievement.

When Novikov won the 2020 WSM, it truly felt like a changing of the guard. He tied for the youngest man to win the contest, which certainly contributed to these sentiments, but it was more than that. Most of the big, recognizable names from the competition were missing, and those who did compete did not seem to live up to expectations. This is not to say that there is no hope for this older generation of athletes, just that between Oleksii, Tom Stoltman, and the rest of the young guns who competed, it is evident that the future is coming.

That being said, just because Oleksii Novikov is the hot new thing in town, does not mean that other people are bitter. Following his win at the 2020 WSM, a ton of former champions reached out on social media to congratulate the Ukrainian on his victory.

One of the more surprising names to be missing from this year’s roster, 2018 World’s Strongest Man Hafthor Bjornsson retired from strongman earlier this year. However that did not stop him from paying close attention. He posted to Instagram following the news that Novikov won the WSM, in order to offer him and the other podium finishers congratulations, and speculate about what the future could be for the young athlete.

“Congratulation to the @theworldsstrongestman winner @novikov_strong ! We might be seeing a new man in the sport that could possible dominate the next decade. He’s only 24 years old and almost has no weaknesses anymore. Crazy! Big congrats to the future as well @tomstoltmanofficial for 2nd! Another very young athlete that has a very bright future in the sport! Last but not least big congrats to @jfcaronstrongman for 3rd place finish! Well done 👍 what did you guys think about this years WSM?”

It was somewhat disappointing to hear that an injury from a car accident forced 2019 World’s Strongest Man Martins Licis out of the competition this year. Then when Oleksii Novikov looked as impressive as he did, it made people question how the two would stack up against each other. However it was all love between these athletes, as Martins praised Oleksii for his performance.

“A huge congratulations to The 2020 Worlds Strongest Man Champion, @novikov_strong ! You’ve earned it brother, you’ve got laser focus, ambition, and passion for winning like nobody else had on the field this year. I can’t wait to train together, and share our knowledge for conquering events.”

Arguably the greatest strongman of all time, Zydrunas Savickas was actually at the 2020 WSM. So he was able to witness firsthand the performance that Novikov put on. He posted a picture that he took with the champion shortly after his win, congratulating Oleksii on the victory.

Also attending the 2020 WSM, Eddie Hall was likely rooting for his friend Brian Shaw to win the contest. Yet when Novikov was victorious, Eddie held no grudges. He praised the Ukrainian, as well as Tom Stoltman and JF Caron for making it on the podium for this year’s contest.

If there is one thing all of these former champions have in common, it is that they were blown away by the performance of Oleksii Novikov. It was quite a win for him, and the future is bright for this talented young strongman.