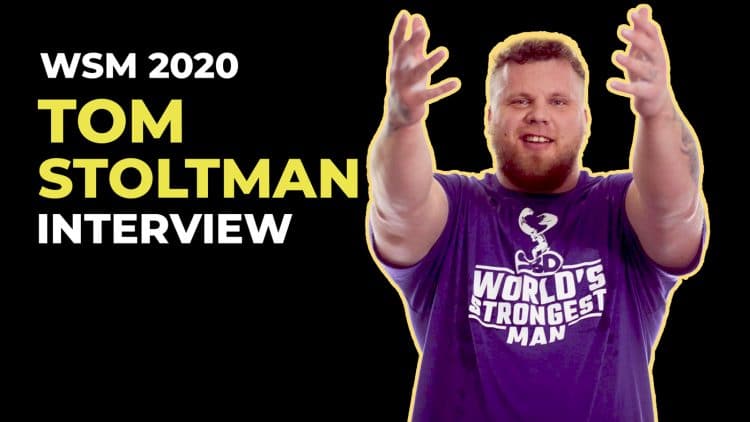 After an eventful weekend of strongman competition, Tom Stoltman ended up landing in second place at the 2020 World’s Strongest Man. Following this performance, we caught up with him to chat about the contest, and what it means for him to be the first Scottish competitor to make it into the top 3.

For a long time, it seemed that Tom was living in his older brother Luke’s shadow, when it came to strongman. Yet the last few years have seen things change, as Luke has ascended to levels previously unseen by Tom. This was only magnified this year, when after narrowly making it into the WSM finals through competing in the same group as eventual winner Oleksii Novikov, he concluded the weekend atop the podium in second place.

“I feel good. It was a hard week competing and I’m just glad it’s over and I got what I came for. So I’m happy, really happy,” Stoltman told Fitness Volt.

“I knew the group was going to be the toughest. That was one of the toughest groups at World’s this year and I knocked out two of the best guys in the world through the Stones. That’s where I was confident because in my eyes no one can beat me at Stones.

In the groups I started off bad but I mean fifth place in your first event after a mistake is alright. Then I was consistent, I won the Keg Toss on the first day, won two events (on the last day). If you had said second place at the start of the week I would’ve been happy for that.”

Making History At The WSM

Tom Stoltman accomplished a pretty big feat at the 2020 World’s Strongest Man. Not only did he finish in the second place position, but he became the first person from Scotland to land in the top 3 in the contest’s history. For him, this means more than just the victory at the World’s, it’s also a victory for his country.

“The first Scottish person to finish on the podium is a special feeling,” Stoltman said. “When I wear that shirt with the Stoltman name on it, I want to have that legacy, but I also want my country to be proud of me.

Hopefully I’m doing that with everyone back home in the Highlands, especially the organizers in Scotland who have given me the opportunity to be a part of the Scottish strongman scene and really pushed my name out there. If it wasn’t for the likes of these guys, there wouldn’t be a Tom Stoltman.

“Hopefully everyone back home in Scotland is proud because I’ve kind of put Scotland on the map and it’s just the start,” he continued. “It’s my second appearance at World’s Strongest Man and I’ve made the final twice, and I won the podium. Yeah it’s going to be a really special feeling and it’s going to live in Scottish history books for a long, long time.”

What’s Next For Tom Stoltman

At only 26 years of age, there is still a bright future ahead of Tom Stoltman. He, alongside Novikov, represent the changing of the guard in a way, ushering in a new generation of strongman athletes. While he wants to take the time to reflect on his strong performance this year, he has his eyes set on a bigger goal for 2021.

“I’m just going to go back here and let it settle, get home and spend some time with my wife, and just get back to the drawing board” Stoltman explained. “I’ve got a lot I can work on, a lot of things to improve, and I’m hungry for it. I want to win the British Championships, the Europeans, I want to go break records in the Stones again. But most importantly I want to win that World’s Strongest Man title more than anything right now. I was this close this year, and I said before this competition that in 2020 I’d get on the podium and 2021 I’d win it. I’ve got to keep that promise. I said to my wife that I didn’t want to win it without her being here.”

With the 2020 World’s Strongest Man in the books, Tom Stoltman is clearly carving a path of success for himself. It will be interesting to see how he looks moving forward.