No Result
View All Result
StrongmanOP-ED

How Ukrainian strongman Oleksii Novikov was able to win the 2020 World's Strongest Man at 24 years old, while setting a new world record along the way 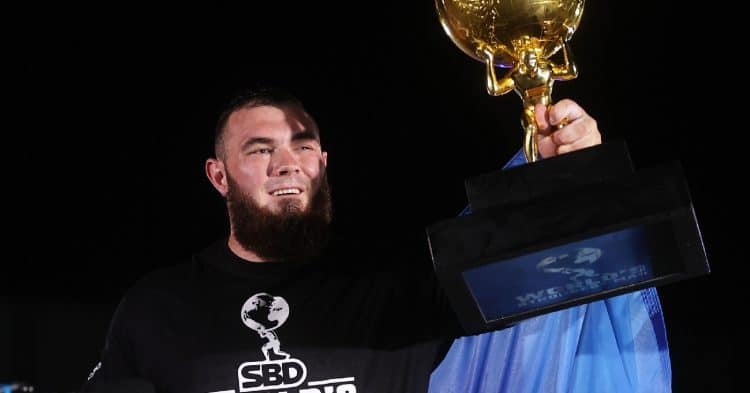 Heading Into this year’s World’s Strongest Man competition, few picked the Ukraine’s own Oleksii Novikov to win. Yet he did just that, securing his place in history books by being tied as the youngest man to win the contest. It was a feat that shocked the world, and proved that the future is bright for this young athlete.

By all accounts, Oleksii Novikov had no business winning the 2020 World’s Strongest Man. That is not to say he is not talented; in fact it is quite the opposite. However there were just a lot of unknowns about this young athlete. He only had one WSM contest under his belt prior to this year’s event, and while he showed a lot of promise there, it was not the type of thing to make him a favorite heading into this year.

Aside from his lack of WSM experience, Novikov is also a lot less physically imposing than the other strongman competitors that we are used to seeing. Standing at just 6’1, he even had trouble with some of events that are designed for taller competitiors, such as the Atlas Stone lifts and Keg Toss, as he told Fitness Volt. Yet regardless of these types of disadvantages, he proved himself to be a more powerful and well rounded athlete than anybody else he faced over the four day competition.

As impressive as it was for Oleksii Novikov to win the WSM at just 24 years of age, there was more to his performance than that. All the way through the competition, he looked nearly unstoppable. Yet the one event that seemed to serve him the best, was the 18-inch deadlift.

Going into the event, Novikov was fairly confident, but he had no idea that he would be able to perform as well as he did. The event was designed with athletes performing deadlifts of increasing weight, all the way to 537.5kg. While his contemporaries fell at various stages of the deadlift, Oleksii did not, making it to the world record and even seeming like he had more in the tank after achieving it.

Not only did Oleksii Novikov score this new record, but when you consider the names he beat on the way, it gives you an idea of just how good he could be. Notable Canadian strongman Tom Magee officially held the record previously, after pulling 535kg in 1983. On top of that, Oleksii also bested the legendary Eddie Hall’s attempt, when he unofficially did a 536kg 18-inch deadlift. Those is some pretty lofty company for the Ukrainian to be accompanied by.

By winning the World’s Strongest Man at 24 years old, Oleksii Novikov became tied as the youngest competitor to win the event. This is an achievement that he shares with the late Jón Páll Sigmarsson, who was victorious at the 1984 WSM, before his untimely passing in 1993. The fact that he has done this leaves fans with no choice but to compare Oleksii to Sigmarsson.

At the time of his passing, Sigmarsson competed in 7 WSM contests, landing on the podium every time, and winning four of them. This is in addition to several big wins at Europe’s Strongest Man and Iceland’s Strongest Man. So if the career trajectory of Novikov is going to be anywhere near his counterpart’s, then we could be in for an exciting next few years.

What Does This Mean For Oleksii Novikov?

As incredible as Novikov looked at the 2020 World’s Strongest Man, this is only the beginning. In fact, one can argue that the hard part begins now, after winning his first WSM. Now he will have to defend this title against the other hungry competitors who have been chomping at the bit to get their place in the history books alongside him. Now he is forced to continue improving, all while the world is watching him. It is a precarious position that not a lot of athletes face at 24 years of age.

As far as what this means for the sport of strongman, the answer is painfully simple. Oleski Novikov winning the 2020 World’s Strongest Man serves as proof that the current generation of familiar faces in the sport is fazing out. When you look at the sport, you see the likes of Thor Bjornsson and Eddie Hall retiring, and Brian Shaw seeming to be a shell of his former self. Even though 39-year old Jerry Pritchett was able to do well this year and 38-year old JF Caron made it to the podium, there is no choice but the face the facts:

Oleksii Novikov is the future of strongman.