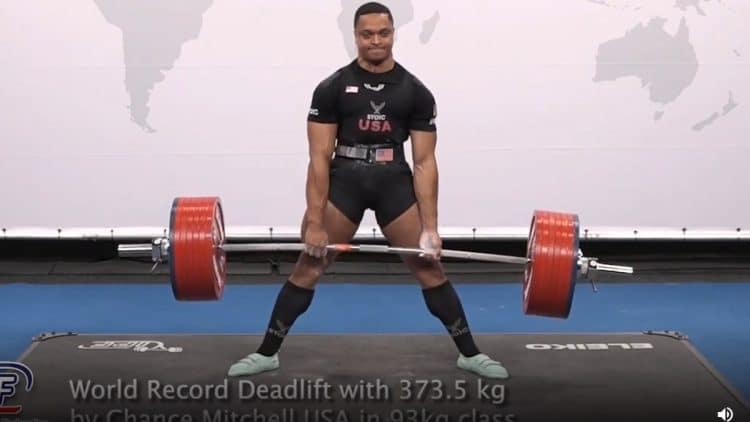 The 2022 IPF World Classic Powerlifting Championship is taking place from June 6-12, 2022, in Sun City, South Africa. The first four days of the competition saw numerous records fall. One of the athletes who succeeded in that was Chance Mitchell. The American representative scored his first IPF World Championships title and two World Records. He competed in the raw 93-kilogram weight class, and outperformed the defending champion, Jonathan Cayco, to claim the win.

Chance Mitchell first broke the IPF Deadlift World Record by pulling 373.5 kilograms (823.4 pounds). He performed it with a sumo stance and a mixed grip. Stendebach Sascha held the previous record, as he deadlifted 373 kilograms (822.3 pounds) at the 2021 EPF Western European Powerlifting Championships.

Chance Mitchell weighed in at 92.1 kilograms (203 pounds) for this competition. So his 373.5-kilogram (823.4-pound) deadlift World Record is over 4x his bodyweight. Interestingly, Chance missed three out of nine attempts, but decided to load more weight on the bar even after failing.

Chance Mitchell has been powerlifting professionally since 2014. So in the past eight years, he has taken part in 28 sanctioned competitions, and tallied up 16 wins. These include NAPF Pan-American & North America Championships, numerous USAPL Texas State Championships, and regular meets. So, Mitchell’s new victory at the 2022 IPF World Classic Powerlifting Championships is the pinnacle of his career so far. Despite being only 27 years old, he could continue to defend this title for many years to come.

Chance Mitchell’s victory did not come without struggle, as the roster for the 93-kilogram weight class turned out to be absolutely stacked. Only a few pounds made the difference between finishing first to third, but that is where Mitchell’s greatness prevailed.