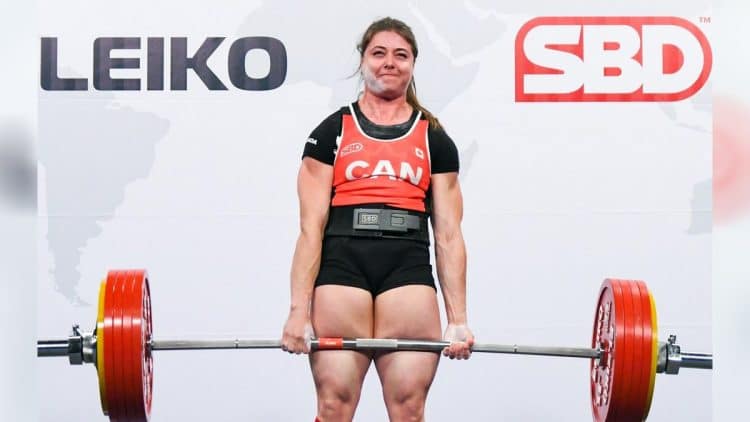 The fourth day of the 2022 IPF World Classic Powerlifting Championships was packed with action and tight battles across both male and female divisions. The closest one was definitely between Jessica Buettner (CAN) and Agata Sitko (POL) in the 76-kilogram weight class, as Jessica won on a tie-breaker. In the process of doing so, Jessica also claimed two new IPF World Records in the aforementioned weight class.

Jessica Buettner, also known as The Canadian Forklift, opened the competition with an IPF World Record Squat of 218.5 kilograms (481.7 pounds). With this, Jessica improved on the previous record by 8 kilograms (17.6 pounds). Jessica also held the old record, as she squatted 210.5 kilograms (464 pounds) at the 2021 IPF World Classic Powerlifting Championships.

Jessica Buettner’s second record came in the deadlift event, which also secured her a last-second win over Agata Sitko. Jessica’s 261.5-kilogram (576.5-pound) deadlift is not only a new U76KG World Record, but is also the heaviest raw deadlift performed by a woman in the IPF. This means that throughout history no other woman, regardless of the weight class, has pulled more weight in the raw division.

Amanda Lawrence held the previous heaviest women’s deadlift of 260.5 kilograms (574.3 pounds). She set it at the 2021 IPF World Classic Powerlifting Championships, but she competed in the 84-kilogram weight class. So Jessica has now surpassed all female competitors in the deadlift event, despite being in a lighter division.

*Jessica Buettner has a higher competition bench press PR of 107.5 kilograms (237 pounds), which she set at the 2022 CPU Nationals.

*Jessica Buettner’s total would also be a World Record, but Agata Sitko totaled the same weight and was also the first athlete to do it. So, Agata Sitko is credited with a Total IPF World Record.

Jessica Buettner and Agata Sitko had the same total at the end of the 2022 IPF World Classic Powerlifting Championships. However, Jessica won because she won two out of three events (squat & deadlift). Agata Sitko did not walk away empty handed, as she set new bench press and total IPF World Records.

With this win, Jessica Buettner has also managed to defend her title from last year. It was also her 19th sanctioned competition, and her 17th professional victory. It seems like this was the most challenging contest so far for Jessica Buettner, as Agata Sitko really pushed her to the limits. However, Jessica is experienced enough and does not crumble under pressure. She defended both her National and World Champion titles, so it’s unclear what she’ll do next.