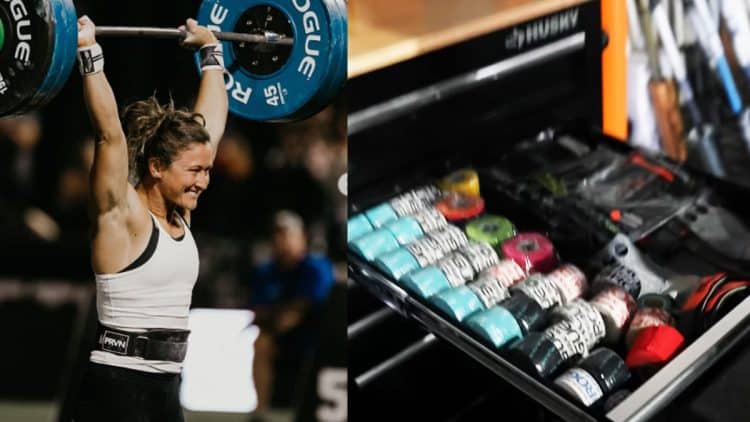 In the event that she wins this year, Tia-Clair Toomey will become the winningest athlete across both the men’s and women’s divisions in CrossFit Games history. So, The 5x Fittest Woman On Earth® will go for her record-breaking sixth title at the 2022 CrossFit Games, which will take place from Aug. 3-7, 2022, in Madison, WI.

She reached this point in her career through hard work, precise training plans, and routine. Tia also utilizes a lot of equipment in almost every training session. Her coach/husband, Shane Orr, now revealed everything she needs for CrossFit via YouTube video. Basically, he showed off Tia-Clair Toomey’s gym bag.

Although Shane Orr called it a gym bag, Tia-Clair Toomey holds all of her equipment in a massive toolbox. Tia-Clair temporarily arranged some freshly delivered mailboxes on top of the toolbox. Although the shipment was not opened, Shane stated that it contained some brand-new equipment. Shane opened up the top drawer first, which is designated for the day-to-day essentials. It contained multiple sweatbands, a stopwatch, nail clippers, heel raisers, a portable road clock, tape measures, Fat Gripz, and some scuba diving footwear (For ice baths).

Moving on to the second drawer, which is the beginning of the right column, Shane Orr explains that Tia-Clair Toomey stationed all of her hand care equipment in there. She mostly filled it with different types of tapes and grips. The next part of the toolbox is Tia-Clair’s “Rope Drawer”, which consists of drag ropes, weighted jump ropes, and traditional ropes. Just one level below, Toomey neatly placed her very important mobility equipment. Most notably, the resistance bands, activation bands, yoga mats, massage balls, as well as one foam roller. Tia-Clair stores her shoes and slippers in the right compartment of the lowest level.

Moving onto the left side of the toolbox, Shane Orr pulled out the first drawer which unveiled a collection of activation bands. While Tia-Clair stored her knee, elbow, waist, and rope climbing sleeves in the drawer below. As she has multiple lifting belts, they were also given their own compartment. The final drawer is filled with stuff that didn’t fit in any of the other ones. So, she tossed a camera tripod, some tape, measuring wheel, supplementation, and disinfectant. To finish it off, Shane Orr showed Tia-Clair Toomey’s chalk bucket, which has its place next to the toolbox.

“Given how much time we spend, it’s really important for her to have something organized.”

As you would expect, Tia-Clair Toomey’s gym bag / toolbox looks impeccably organized. The fact that everything is in one place certainly makes training sessions easier for her. As Tia-Clair has repeatedly shown that she knows what she is doing, having her equipment like this is definitely the best way for her to maximize her training results. Luckily, Tia-Clair’s next performance is just around the corner, so she will get to reap the fruits of her labor.