In preparation for 2022 Olympia, Bonac continues to add quality muscle mass to his physique with his latest bulking diet. 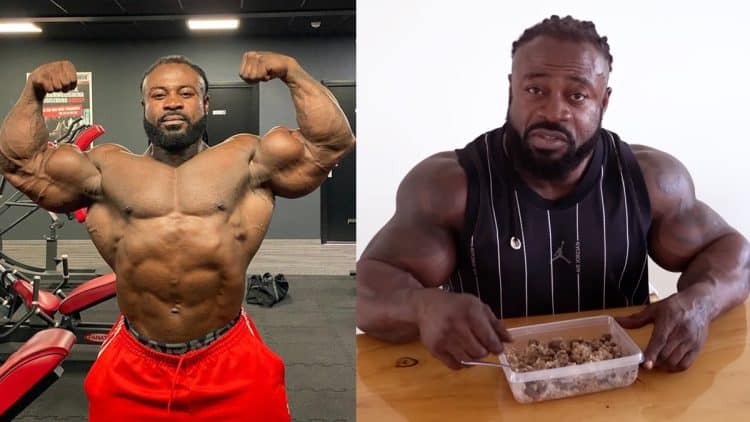 Olympia contender William Bonac has big plans for the rest of his 2022 season of bodybuilding. In a recent YouTube video, Bonac shared his bulking diet in preparation for Olympia, which is expected to take place from December 15th – 18th in Las Vegas, Nevada.

Bonac has proven throughout his career that he has the ability to stand against just about anyone on stage. In 2020, he captured the Arnold Classic title, defeating the likes of reigning two-time Mr. Olympia Mamdouh “Big Ramy” Elssbiay and 2008 Mr. Olympia Dexter Jackson. Bonac’s combination of overall thickness and conditioning make him a threat anytime he dials in preparations.

He returned to the Olympia stage last year but found himself outside the top five in sixth place. He was tasked with facing some of the world’s best Open competitors like Brandon Curry, Hadi Choopan, Hunter Labrada, and rising bodybuilding star Nick Walker.

Thus far, William Bonac has competed at two shows this year. The bodybuilder took his talents to the 2022 Arnold Classic, however, failed to earn his second title after coming up short to former Mr. Olympia Brandon Curry. Following the event, many fans and bodybuilders argued that Bonac should have gotten the nod in Ohio. Despite taking runner-up, he wasn’t deterred and turned in a statement-making performance at the 2022 Boston Pro.

After clinching his invitation to 2022 Olympia as a result of his Boston Pro win, Bonac gave a heartfelt victory speech. He said he intended to fix his Gynecomastia and abs (which many believe prevented him from winning the 2022 Arnold Classic title), before making his way to the Olympia stage once again.

With around 21 weeks until the most prestigious event of the year, “The Conqueror” is methodically building his physique to separate himself from the competition this winter. Below, you can find the bulking diet he’s implemented to prepare for 2022 Mr. Olympia.

William Bonac kicks off his morning with a protein-packed breakfast. His meal consisted of six eggs total with three egg whites and potatoes. The 2020 Arnold Classic champion likes to eat eggs with potatoes though sometimes adds steak to the meal as well.

“This is my morning meal. It’s like about six eggs. You know, three whole, three egg whites, about 300 grams of potatoes. I’m going to bake it a little bit. It’s not like my normal morning routine, but sometimes I have my oats with steak with it as well. Sometimes, I just switch it up a little bit. This is really easy for me to eat because I have to eat my eggs. I like to separate the eggs normally, I don’t have to, but I’d rather have it with my potatoes and extra carb meal.” William Bonac told his YouTube audience.

Before consuming his first meal, Bonac adds some ketchup after saying he’s not ‘supposed to.’ He says he prefers potatoes over rice because rice meals leave him feeling a little hungry typically.

“Potatoes always fill me up. This is one of the carbs I like to eat to fill up. It’s easy to eat. With rice, I can eat it and still feel a little bit hungry.”

The Men’s Open competitor consumes his first meat protein of the day on his second meal. Bonac said he’s eating an extra meal today because he skipped one yesterday.

“Finished my second meal. I’m excited for my third meal. I think that will be steak. Tenderized steak, so looking forward to that.”

Before moving on to his third meal, Bonac always prays and blesses the food before he eats.

For meal four, William Bonac adds peanut butter and jelly to his oats with whey.

“Normally, I think after my second meal but now I do it for my fourth meal. Two scoops of peanut butter and two scoops of strawberry jam.” Bonac continued. “After this meal, I will hit the gym.”

For Bonac’s final meal of the day, he opts to eat rice and chicken.

“See this is rice with chicken. 300 grams of rice, 250 grams of chicken breast. I’m going to heat it up right now, eat it before the gym is going to close.”

Despite taking time off to add muscle, Bonac has remained busy inside the gym. The Ghana-born athlete connected with fellow Boston Pro winner Urs Kalecinski and offered the rising Classic Physique contender some tips while training with a high-volume leg workout.

It appears Bonac’s preparations are going according to plan. The Open class bodybuilder shared a physique update last week and revealed his weight of 260.8-pounds. He promised ‘brick by brick,’ he will leave no stones unturned when he finally graces the big stage this winter.

Undoubtedly, Olympia preparations are heating up for any athlete eying the event. Bonac’s commitment to his bulking diet will pay dividends when he rematches many of the athletes who placed higher than him at Olympia last year.