Hafthor Björnsson is ready to fight The Gypsy King and is only waiting for the contract. 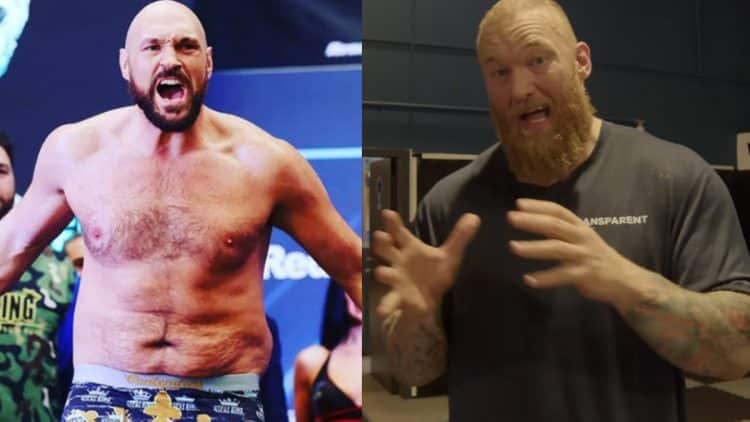 2018 World’s Strongest Man, Hafthor Björnsson, definitely had a period of indecisiveness after his bout against 2017 World’s Strongest Man, Eddie Hall. Not having a clear goal had a huge impact on his motivation, which resulted in Hafthor losing 6 kilograms (13.2 pounds) of bodyweight. However, Hafthor now knows exactly what he wants in the future and is working very hard in order to accomplish it. Not only is he training consistently, but is also performing up to three sessions every day.

Recently Hafthor Björnsson and the greatest heavyweight boxer currently, Tyson Fury, teased a fight, although it has not yet materialized. However, Björnsson wants to use the situation in order to secure himself a once-in-a-lifetime experience. So, Hafthor posted a new YouTube video on July 27, 2022, in which he sent a message to Tyson Fury. Björnsson also revealed some interesting details about the potential boxing match.

Hafthor Björnsson starts the video by explaining how his training sessions have changed in recent times because of the rumors about the fight.

“I’m training three times a day for a reason… There is a big bust going on about a fight between me and Tyson Fury. It could possibly happen in November.”

Björnsson then reveals that he talked to Fury’s team who wanted to schedule a fight for September. They couldn’t come to an agreement because Hafthor wouldn’t have time to prepare. Considering Björnsson has just begun training at full capacity, November would be perfect for him.

“Basically, I just need the contract. So, there is a big challenge to Tyson Fury and his team. Send me the contract, I’ll sign it, so we can have it official. I want to take this seriously.”

He continues by praising Tyson Fury’s skills and stating that there is no ill intent behind the potential fight. However, he does hope that Fury will make up his mind.

“I’m ready. I’ll fight Tyson Fury anywhere, at any time, almost. Let’s have it in November.”

Björnsson believes that with some preparation he would actually have a chance to beat Fury, which is why he wants to take it seriously. Having it become official will allow him to give his all during training.

“Send me the contract and let’s make this happen. Let’s not just talk about this.”

Related: Hafthor Bjornsson Meets Tyson Fury And Teases Him About His Physique

Tyson Fury has not yet responded to Hafthor Björnsson, but he will probably do that soon. Both men are good friends, as Fury visited Hafthor just before his fight against Eddie Hall. However, Tyson recently retired from boxing and said that he is willing to come back for an exhibition match. Boxing pugilist should take advantage of this perfect opportunity to make a comeback, as strongman Hafthor Björnsson is one of the best athletes ever. Throughout his career, he has won numerous competitions, the most prestigious being the 2018 World’s Strongest Man contest. Björnsson was also a 3x Arnold Strongman Classic Champion and 5x Europe’s Strongest Man.