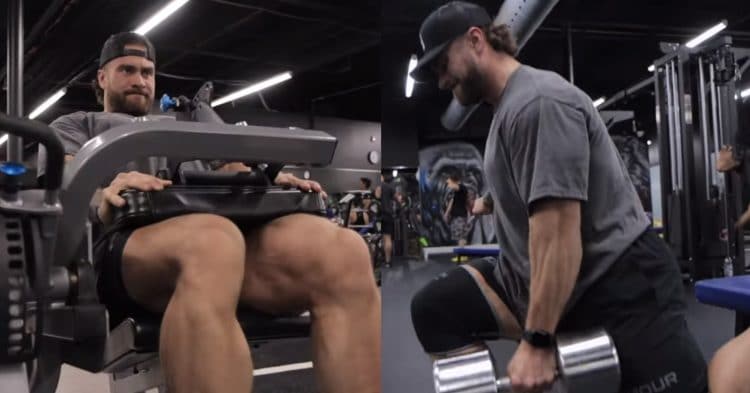 Bodybuilder Chris Bumstead recently shared his leg day workout. Bumstead is a three-time and current Olympia Classic Physique champion. Following the win at 2021 Olympia, Chris Bumstead took time off after six years of a relentless bodybuilding routine. However, the battle with Covid-19 infection at around Christmas time in 2021 resulted in a massive weight loss for him.

Bumstead has resumed training earlier this month but currently, he is in a reintegration phase and is making steady progress in the gym. He shared the leg day workout on his YouTube channel and revealed that it is his third leg day workout since resuming the gym.

Chris Bumstead started the leg day workout with Single leg extensions on the machine. He stated that his knee issues have intensified due to the time off from the gym and as a result, he has to pay extra attention to warm-up exercises. Bumstead added that the weight on the machine he uses is too light for him. Therefore he has modified the nature of sets.

“This machine is a little bit too light… the full stack. So instead of doing like, just 20 reps, I do 20 reps and then I go back to the leg I started with, go to failure and I do it twice. So do like three sets in one. Not a drop set but like a rest pause. The rest is like whatever however long the other leg takes,” Chris Bumstead said.

The 26-year-old then proceeded to perform leg curls. He revealed that after suffering a hamstring injury, he was able to build a mind-muscle connection that has helped him.

“Somehow it translated to the other leg. So when I train hamstrings now, they contract so hard it’s like they’re cramping,” Chris Bumstead added.

After leg curls, it was time for the back squats to train the hips and hamstrings. Bumstead started the warm-up set with a barbell without plates. He worked his way up to three plates with one additional plate for each set and used knee sleeves and a lifting belt for the working sets. For those wondering when is the right time to wear knee sleeves, Chris Bumstead said:

“Personally, I’m old, I have old man knees. So I just wear them for injury prevention when I go heavy. But I personally like to warm up until one or two sets before my working set… I’ll wear no sleeves. That’s so that I’m not completely dependent on them. I still got a little bit of completely free weight on my knee. So when I start to go heavier, especially now that I am getting back into squats, I throw the sleeves on. I wear really loose ones. More just to keep my knee a little supportive and warm.”

Chris Bumstead performed the working set of 15 reps with four plates as his heart rate shot up to 168bpm with the weight of 405 lb. Since his body is still not used to the stress and stimulus of an intense workout after returning from the time off and Covid-19 infection, Chris Bumstead stated that he tends to de-load after the heaviest set.

“Instead of completely frying my system, I’m trying to get the most out of the least so my body’s still going to be growing. Because it is still more stress than I am used to and I’m not kind of hurting myself in the process,” Chris Bumstead said.

After performing the final squats set for 12 reps with four plates, Chris Bumstead went on to perform Bulgarian squats and reiterated their importance for building glutes muscles.

“They’re great for building, outer quad and glute combo. My glutes get fired on these. That’s how you build that big back shot with like… tight glute striations,” Chris Bumstead added.

After wrapping up the workout, Chris Bumstead said that he is still in the reintegration phase after returning to the training and therefore, he is keeping the set volume low as of now.

“So I’m only doing two working sets, throwing in a drop set if I feel like I could do more,” Chris Bumstead said.

The defending Olympia Classic Physique champion then wrapped up the workout with hamstring curls and calf raises on the machine.