Daniel Bell is no stranger to massive lifts having claimed multiple World Records throughout his career. 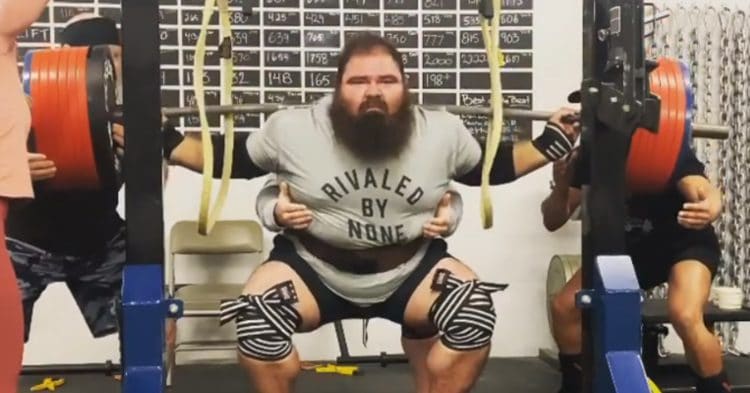 Daniel Bell is one of the strongest powerlifters in the sport. Competing in the 140+ kg category, he owns a few World Records, and has posted some huge lifts throughout his powerlifting career. Daniel’s specialty is in the squat event, as he is in a handful of people that have squatted over 1000 lbs (453.6 kg) raw. Now Daniel has posted a 470 kg (1036 lbs) squat in wraps from training.

In the video, we can see Daniel using knee wraps and a lifting belt to aid him in the lift. It is interesting to see that he also used wrist wraps and elbow sleeves, to save his joints under the bone-crushing weight. In addition, Daniel’s squat went up quickly, and it seemed like he didn’t struggle at all.

Daniel has been training for only two months, following his hamstring tear and kidney problems last year.

At 35-years-old, Daniel Bell is a veteran of the sport, who accumulated a lot of success and accomplishments in his career. His first sanctioned competition was in 2005, but his second was in 2014 when he started seriously competing. He has won the American National Championships many times and mostly competed in raw or wraps categories.

Since Daniel liked to use wraps in his squats, he has a higher squat and total in the wraps category:

It is nice to see Daniel Bell training and doing what he loves once again. He is quickly gaining momentum, coming close to his PRs, and squatting over 1000 lbs after only two months of training. It is not clear when Daniel will compete next, but judging by his training lifts when he does, it will be a spectacle.