The Marvel superstar was on the deck of a Naval ship while performing the workout. 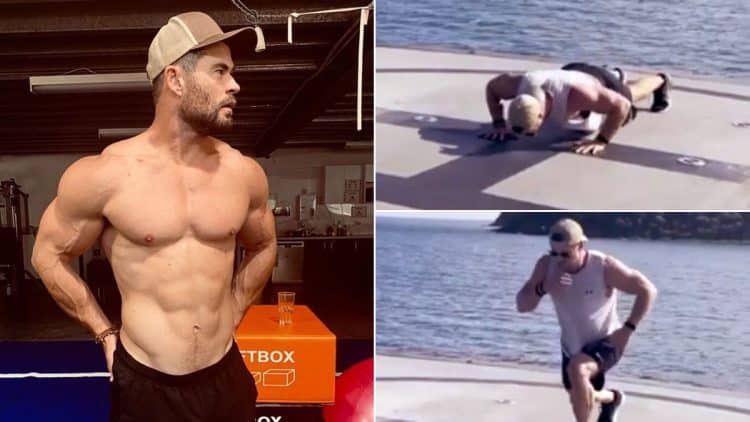 Chris Hemsworth is known for having one of the best builds in Hollywood. The famous actor brought the Marvel superhero Thor to real life with an impressive physique that resembles the fictional character. In a video shared on his Instagram, Hemsworth shared a no-equipment workout from the deck of a floating Naval ship in the middle of the ocean.

Hemsworth has a passion for fitness and likes to stay in shape throughout the year. He took his physique to the next level for his starring role in Thor: Love and Thunder, the fourth installment of Marvel’s Thor movie series. The Hollywood A-lister credited bodyweight training for his transformation where he focused on functionality instead of using free weights. He shared a behind-the-scenes photo from the shooting of the movie showing off his insane bicep development.

He regularly gives his followers an insight into his training regimen. Having started a fitness lifestyle app called Centrfit, the 38-year-old shared a heavy chest workout with lots of yelling and screaming.

UFC color commentator and popular podcast host, Joe Rogan, had stated Hemsworth was the sexiest man alive. Although he had questions about his natty status, he gave Hemsworth credit for maintaining a physique that requires “immense amounts of hard work.”

In a recent video posted on his Instagram, Hemsworth shared a bodyweight workout that can be performed literally anywhere. He was doing the circuit training program on the top deck of a Naval ship he reported to be near the set of Top Gun: Maverick.

“For the next 8 weeks I’ll be dropping @centrfit inspired workouts to kick the week off. Mostly body weight and minimal equipment you can do in ya lounge room at home, in the gym or on a large floating naval ship straight off the set of top gun. Get involved !!”

The bodyweight routine consists of the following 💪🏻

Hemsworth can be seen performing all the exercises in this equipment-free workout at the beautiful location. It is a part of a series of workouts that he will be sharing for the next eight weeks.

He indicated that these workouts would be mostly body weight and require very little use of any equipment so that anyone can perform them from anywhere.

He had previously shared a full-body workout using only a medicine ball to build explosive power and strength. He has a special focus on making sure his training methods can be done by anyone. It will surely motivate people to follow his techniques and get in shape all from the comfort of their homes.

How To Do Lateral Bounds – Muscles Worked, Benefits, and Alternatives