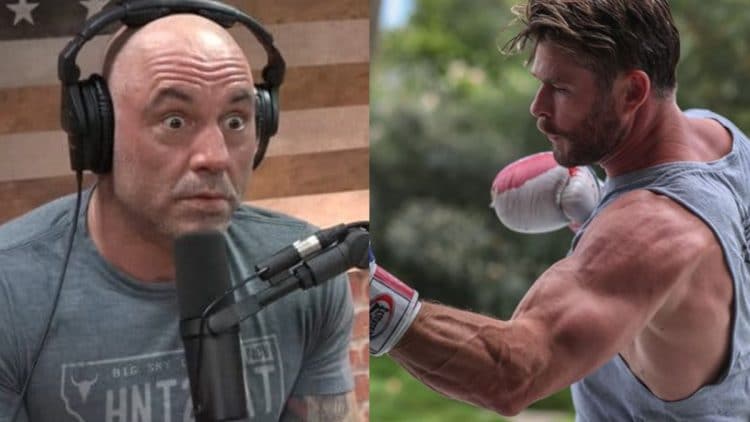 Joe Rogan, a color analyst for the UFC and popular podcast host, always has a unique opinion on the latest and greatest events in the news cycle. In a recent YouTube video, Rogan lists Chris Hemsworth as the sexiest man alive but questioned whether or not he has a natural body.

Rogan and his podcasting empire have seen him touch on a variety of current events for years. His massive fanbase often wonders what his takes are regarding a number of pressing issues affecting the world. Nothing is off limits for the 54-year-old, and he proves as much every week, attacking issues that many shy away from. In the world of fitness, his opinion holds a lot of weight due to his affinity for mixed martial arts and other sports. The timeless ‘natty or not’ debate usually rears its head during these candid discussions too.

One famous actor who is often pointed out for having one of the best, and most shredded builds in Hollywood is Chris Hemsworth. Hemsworth is known for his exciting movie roles in the Marvel Cinematic Universe, as Thor. He periodically transforms his physique for movie roles, with the latest being Extraction. The role required him to focus on strength, agility, and speed, a goal Hemsworth accomplished with a dedicated bodyweight training plan. Apparently, the biggest heartthrob in Hollywood left Rogan with a lasting impression.

In a YouTube video where Rogan was joined for a roundtable discussion, the podcast host gave his thoughts on Hemsworth and whether or not he uses steroids.

According to Rogan, not only is Hemsworth the sexiest man alive but credited the Hollywood actor for the ‘immense amounts of work’ necessary to maintain a physique of that caliber. Rogan, who works for the UFC, is accustomed to athletes being tested for performance-enhancing drugs (PEDs) via USADA. The company policy requires athletes to check-in and be drug tested regularly throughout the calendar year. However, Rogan made it clear (as a joke) that the drug testing entity wouldn’t be looking to test Hemsworth any time soon.

As of late, Brian Johnson, well known as ‘Liver King’ was questioned by Rogan in regard to whether or not he uses steroids. Rogan, who doubted Liver King’s natural status, spoke about it on his podcast, where he clarified that Liver King doesn’t have a ‘natural body’. In response, the raw organ meat-eating star took to Logan Paul’s Impaulsive podcast, relaying that he ‘doesn’t touch the stuff’.

Rogan isn’t afraid to broach these topics and revealed recently what he takes to maintain his physique year-round. In addition to testosterone replacement therapy (TRT), the combat sports analyst shared three peptides that make up his ‘stack’: BPC-157, ipamorelin, and thymosin.

While Rogan hinted that Hemsworth’s physique may not be natural, he didn’t discount the hard work it takes to sculpt a body like the Australian actor has. In the latest ‘natty or not’ debate, Rogan wasn’t 100 percent, but appeared confident that Hemsworth is enhancing his body.