The famous actor showed off some incredible bicep definition during his latest role in Thor: Love and Thunder. 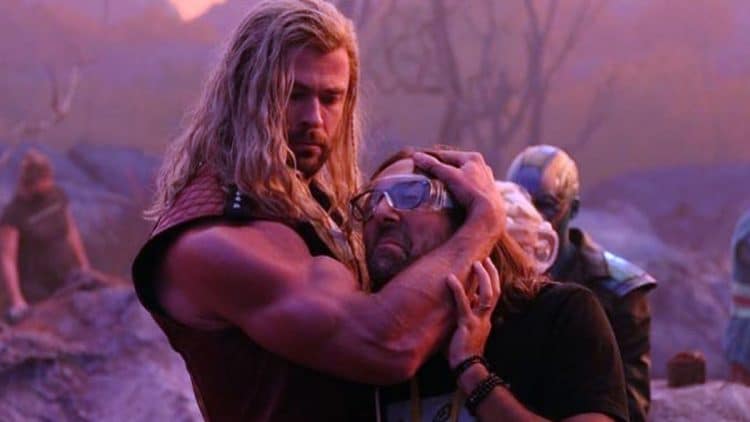 Actor Chris Hemsworth has maintained one of the best builds in Hollywood for years. Hemsworth recently showed off insane bicep development in a behind-the-scenes photo while on the set for Thor: Love and Thunder.

For his fourth installment of Marvel’s Thor series, Chris Hemsworth has taken his love for fitness to a whole new level. Hemsworth is no stranger to the sacrifices necessary to building a show-stopping physique. The 38-year-old got ripped for his lead role in the 2020 action film Extraction.

Hemsworth trained non-stop in preparation for the film as many would expect from someone who played a Black Ops mercenary. He utilized bodyweight training to facilitate his physique transformation, where he focused on speed, agility, and strength instead of using free weights.

The famous actor is used to getting into peak physical form. He created a lifestyle wellness app called CentrFit in 2020 to help him with the challenges present in transforming a physique. Marvel movies are known for pushing the limits with each film bringing about more excitement than the last. This was certainly the case for Hemsworth, who is drawing a lot of attention for not only his first ever nude scene but his t-shirt ripping biceps.

Chris Hemsworth’s Lighthearted Training Advice: ‘It’s Easier to Show Them Rather Than Tell Them’

In a recent post made to Instagram, the Australian actor showed off his crazy arm development while practicing one of his favorite exercises, called ‘crack the nut.’ Find his full post and behind-the-scenes photo below via Instagram:

“People always ask me for training advice and I’ve learnt it’s easier to show them rather than tell them. Here I’m demonstrating one of my favourite exercises. It’s called crack the nut. Good luck with your fitness journey…”

In addition to his favorite exercise, Hemsworth recently showed off one of his favorite pre-workout smoothies. The 38-year-old said that these beverages work great and offer a ‘caffeine-fueled experience’ when he’s tasked with a tough training session.

Hemsworth shared a ‘heavy chest workout’ earlier this month he used to build muscle for his latest Marvel project. According to his coach Luke Zocchi, the famous actor was forced to expand his thinking and get creative because the project required him to pack on an excessive amount of muscle. His coach added that he was challenged with eating upwards of ten meals a day to ensure he was big enough for the role.

Results are what count, and Hemsworth even tried a Pilates workout, which he described as ‘brutal’ while building up his core strength. He was joined by his brother Liam Hemsworth during the exercise routine. Urging his followers to try all of his workouts, Hemsworth leaves no stones unturned anytime he’s in the gym.

Hemsworth wasn’t the only actor to pack on muscle mass for Thor: Love and Thunder. Academy award-winning actress Natalie Portman also got in killer shape for the marquee attraction.

Given his consistency in diet and training, Hemsworth remains one of the most successful actors alive. Judging by his ripped biceps in his latest post, Hemsworth’s dedication to the gym is unrelenting.