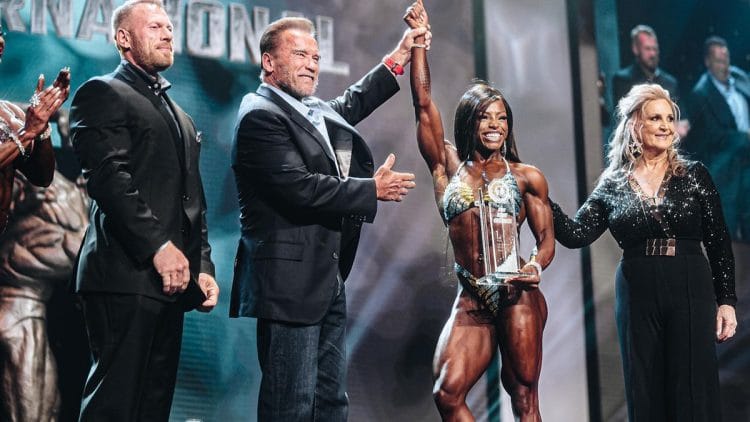 Nicole Zenobia Graham, Natalia Soltero, Cydney Gillon, Lola Montez, and Jessica Reyes Padilla were in the first callout in the pre-judging round with Gillon in the middle.

Figure International is making a comeback at the 2022 Arnold Classic after being dropped in the 2021 edition due to COVID-19 restrictions.

Figure International was one of the most talked-about contests ahead of the show as the defending Figure Olympia champ, Cydney Gillon will be stepping on stage.

Cydney Gillon is the reigning (and 5X) Ms. Figure Olympia champ. She won the Arnold Classic in 2019. Gillon is making a comeback at the 34th edition of the show after a two-year hiatus.

Natalia Soltero is the other Arnold Classic Figure International champ (2020) competing at the 2022 edition of the show. She has been on Gillon’s heels since her second-place finish at the 2020 and 2021 Ms. Figure Olympia. Soltero made a queen-sized entry in the pro bodybuilding world by winning her debut show — the 2017 New York Pro.

Bodybuilding fans were expecting a tough competition between Gillon and Soltero going into the 2022 Arnold Classic.

Figure division prioritizes shape, symmetry, and muscle development over sheer size. It is closer to Men’s Physique division when it comes to posing. Figure athletes are judged based on a series of quarter turns.

From the very first time Gillon walked onto the 2022 Arnold Classic stage, you knew she was taking home the gold. While Cydney looked great from all angles, she had all the other contestants beat from the back by a margin.

Cydney Gillon is one of the most dominant female bodybuilders of our time. Watch her work the stage once and you’ll understand why she is the 5X Ms. Olympia champion. Only a few other bodybuilders — men included — can match her persona and stage presence.

When on the stage, she takes her time, nails every move, lets the other contestants do their things, and hits it out of the park with her poses.

Cidney Gillon is the gold standard when it comes to Figure physiques. The judges are comparing all the other athletes to Gillon as she is considered to have the ideal Figure physique.

Padilla’s most recent overall victory was at the 2021 Puerto Rico Pro. She was one of the most peeled bodybuilders on the stage. She had a distinct dry and grainy look, which worked in her favor. Jessica had an athletic-looking physique that made her stand out.

Lola is quickly making a place for herself in the Figure division. The 2018 Arnold Amateur champion was making her Arnold Classic debut. Montez made her Olympia debut in 2019, finishing 15th. She didn’t compete in the 2020 Olympia but jumped up six spots to ninth place in 2021.

Nicole had one of the most muscle mass. Although she did not appear to do so well in the first round, she quickly climbed the ranks in the judge’s callout round.

She won the 2021 Arizona Pro and finished fifth at the 2021 Olympia. Graham turned pro in 2018 and has also won the 2019 Tampa Pro and the 2020 New York Pro. There are no doubts about the fact that Graham is an upcoming big star in the figure division.

Natalia Soltero looked right on the money and arguably had the most shredded abdomen on the 2022 AC Figure International stage. If Soltero had been successful in beating Gillon, she could have entered the 2022 Olympia with the momentum needed to possibly upset Gillon. Notably, Soltero and Gillon are both qualified for the 2022 Olympia, and we are expecting a heated contest between the two rivals in Dec. 2022.

Natalia’s fifth-place finish was probably the biggest upset of the show. She was being considered Cydney’s challenger number one.

Bojana looked great from all angles. She had great conditioning.

Check out the 2022 Arnold Classic Results For All Divisions.

The figure division debuted at the Arnold Classic in 2003 and has seen 11 champions since.

Do you agree with the Arnold Classic 2022 Figure International results? Who do you think should have won the title? Let us know by tagging us on social media and in the comments below.