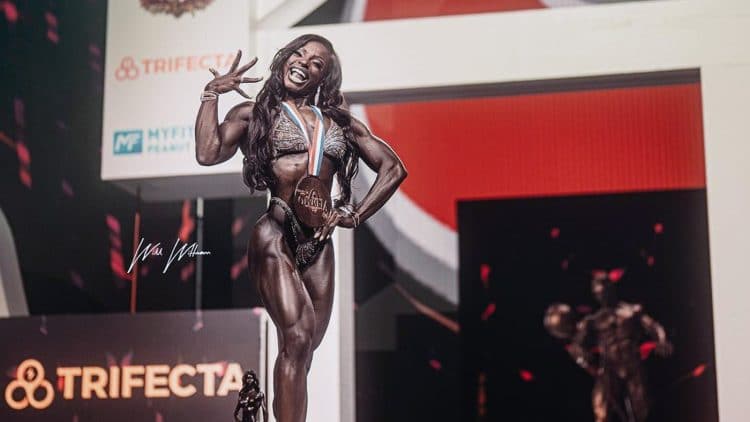 Cydney Gillon is the 5X Figure Olympia champion. She was unmatched and dominated the division from the moment she stepped onto the stage.

Gillon also held the record for most Figure Olympia title wins (4), a tie with Nicole Wilkins. From the moment the reigning champ stepped on stage, she looked in the mood to break the tie and break the tie she did.

How Figure Olympia Athletes Are Judged

Figure division is closer to Men’s Physique division when it comes to posing. Figure athletes are judged based on a series of quarter turns.

In Figure division, women are judged on balance and shape — specifically in hamstrings, glutes, shoulders, and back. Judges do not want to see deep musculature and striations in Figure athletes because that is reserved for Women’s Physique competitors.

Cydney Gillon knew she had won the show from the moment she walked on stage. She undoubtedly had the best Figure physique. Look at her once, and you would know what a Figure athlete is supposed to look like.

Not only did Natalia Soltero look absolutely stunning at the finals, but she also blew us away at the Olympia presser and pre-judging.

It was Stephanie Gibson’s first Olympia show. Great confidence for a first-timer. She walked like a tigress who owned the stage. Arguably the perfect placing for a debutant. We look forward to seeing her in the coming years.

Jessica Reyes Padilla was a stunner at the pre-judging. Great shape, symmetry, and muscle definition. The only thing that could have gone against her was that she was shaking too much during her pre-judging posing routine.

Nicole won the Arizona Pro. Shows are won from the back and she knows this. Only a few other athletes could match her from the back.

Do you agree with the Fitness Olympia 2021 results? Who do you think should have won the title? Let us know by tagging us on social media and in the comments below.

Chief Olympia officer Dan Solomon has shared a video on Instagram revealing the dates and location for 2022 Mr. Olympia,...

Mamdouh “Big Ramy” Elssbiay wins Mr. Olympia 2021. Although he did not come in peak conditioning during the pre-judging round, he...

Francielle Mattos is the new Wellness Olympia 2021 champion. Since she is the first of her name, her physique will go...

Derek Lunsford is the NEW 212 Olympia Champion. Lunsford was the dark horse going into the 2021 212 Olympia. From...