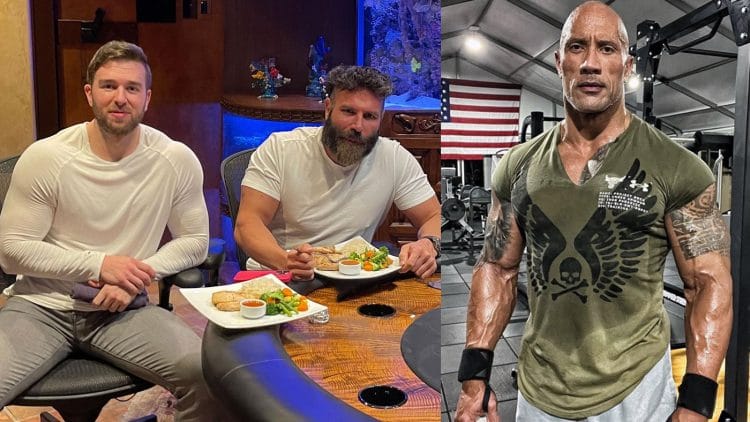 Dan Bilzerian shared his frank opinion about Dwayne ‘The Rock’ Johnson‘s public image and personal. Bilzerian recently appeared on YouTuber Derek’s channel, More Plates More Dates that have become well-known for its unique and rather unfiltered take on issues like steroid use, particularly in sports, fitness, and the entertainment industry.

Hollywood sensation Dwayne Johnson is seen as the epitome of masculine fitness around the world. Johnson’s arduous diet and workout routines are as popular among the youth as his movies and the larger-than-life personality has an aura of a flawless life.

While most of us are blown away by the Rock’s massive Physique, Dan Bilzerian sees it as a red flag for someone that is fast approaching his 50s. During his discussion with Derek, Bilzerian opined that maintaining a massive Physique is never good for longevity when they age.

“It’s unhealthy to sustain that level of mass. They show people are giants, like basketball players. It’s just not healthy to be that big, Dan Bilzerian said.”

While Bilzerian’s remarks about Dwayne Johnson were not just limited to his the latter’s physique, diet or workout methods. Bilzerian is an admirer of The Rock and acknowledged everything the Hollywood sensation has achieved in his life.

“To me, I don’t understand The Rock. Because… don’t get me wrong. I respect what he has done. The guy is a beast. He is amazingly charismatic, always camera-ready, Dan Bilzerian said.”

Dan Bilzerian doubts if Dwayne Johnson is being authentic

However, Dan Bilzerian stated that he doubts if The Rock is being himself during his public appearances. The Armenian-American argued that Johnson’s incredibly disciplined life and cohesive responses indicate that The Rock is playing a character in real life.

“The thing I don’t like about The Rock is I don’t feel like he gets to be authentic.”

“I do whatever the f*ck I want. He does not! Unless like he is playing this character for ever is what he wants. I don’t think that’s what he wants,” Dan Bilzerian opined.

The 40-year-old added that Johnson’s public image and personality might be fabricated by his PR team and Johnson himself might be a different person that never shows his real personality to the world.

“I feel like he is too f*cking rich to be constantly playing a character, let’s put it that way.”

The Rock is one of the biggest Hollywood stars of our time and also one of the most recognized faces around the world. Although harsh, Dan Bilzerian’s comments do not cast a shadow of doubt on Johnson’s personality. Instead, they highlight the difficult side of being a celebrity. Dwayne Johnson does like being a celebrity but admits that his massive fame constantly reminds him of his position in society.

Whether Dwayne Johnson is playing a character in real life or not does not matter. At the end of the day, Johnson knows that he carries a responsibility to be a celebrity and tries to conduct himself in the best possible way.

Dwayne Johnson, well known as The Rock, is one of the fittest actors in Hollywood with an unyielding dedication to...