No Result
View All Result
BodybuildingOpinion

We compare two of the biggest and greatest bodybuilders of all time to find out who had the best back. 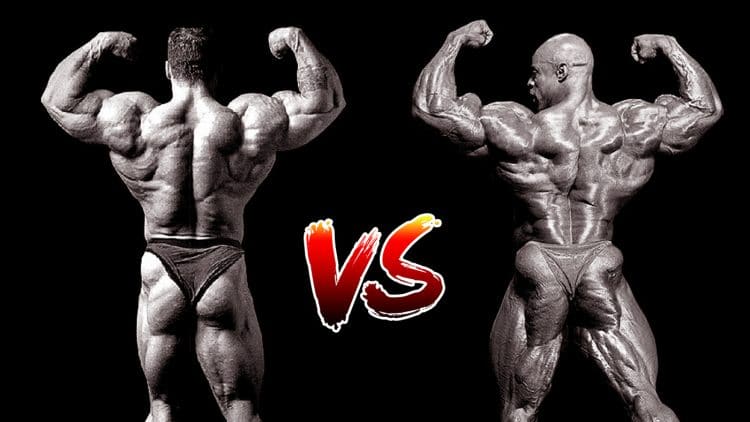 Ronnie Coleman vs. Dorian Yates Back

Boy, oh boy. The best back. We are so stoked about this!

Dorian Yates and Ronnie Coleman have 14 Sandows between them. They are some of the biggest and greatest bodybuilders of our generation. They pushed the boundaries of the sport of bodybuilding and can be credited with making mass monsters the new normal.

However diverse their backgrounds, both Olympia champs had one thing in common. They set new standards in the back department. Their backs were so wide they pulled the curtains on their competition.

Chest striations, bicep peaks, six-pack abs are all nice, but a wide and thick back is what separates men from boys, pros from rookies, and legends from mere mortals.

This is how two of the best bodybuilders of all time fare against each other:

Now, if you are wondering about their strengths and weaknesses, we have got you covered.

Before you go on ranting about Yates’ biceps or Coleman’s calves, know that this is a comparison between the two bodybuilders. We do not mean that Yates had the worst chest and biceps in the bodybuilding circuit at the time. But were Yates’ bicep peaks relatively lagging compared to Coleman’s, sure!

Coleman & Yates – Battle of the Titans

It is no secret that bodybuilding shows are won from the back. But the question is, why don’t abs, chest, or even your hamstrings get the same honor?

Building your posterior chain muscles is one of the hardest things to do, mainly for two reasons:

Your back is also the second-largest muscle group (after your legs). A wide and thick back can make a bodybuilder look more imposing and masculine. These could probably be reasons why judges give more weightage to the back in a contest.

Must Read: One Top-Secret Technique That Will Take Your Gains To The Next Level

Going Down the Memory Lane

Some bodybuilding enthusiasts think that the best back comparison between Dorian Yates (6X Olympia champ) and Ronnie Coleman (8X Olympia champ) is like comparing apple and oranges since both Olympia legends are from different times.

Contrary to what these people think, Dorian Yates and Ronnie Coleman were in the same Mr. Olympia lineup seven times between 1991-97. Yates dominated all seven contests, while Coleman never ranked higher than fifth.

But this is just half the story. In 1998, a year after Yates retired, Coleman reinvented himself. Like a Phoenix, he rose from the ashes. He conquered the Olympia throne in 1998 after finishing 9th in the 1997 showdown. Quite a progression, we must say.

Related: Dorian Yates Gives His Tips For A Sculpted Back

You see, bodybuilding is a complex game. Thanks to the complexity of the human body (genetics), we never got to see both the bodybuilding legends at their best at the same time.

Interestingly, both bodybuilding greats were never in the same callout in the seven years they shared the stage. This brings us to muscle maturity and peaking.

Although Yates is only two years older than Coleman, the former peaked in 1992 while the latter did not reach his full potential until 1998. Six years is a lifetime in the bodybuilding world.

This should come as a wake-up call for anyone who feels they cannot be a bodybuilder because there are no fancy gyms in their neighborhood. We hate to be bad news bearers, but the lack of a hack-squat machine is not the reason behind your stagnated physique.

Your laziness and lack of drive are.

Dorian Yates trained in a basement gym called “The Dungeon.” As soon as a show was done, he went off the grid. There was no communication with the world, just hardcore training. He did not care about sponsorship dollars or giving interviews. This is how he got his nickname “The Shadow.“ Yates’ approach makes him one of the most hardcore Mr. Olympias of all time.

On the other hand, Ronnie Coleman worked out at the hardcore “Metroflex gym” in Texas. His gym had no air conditioning or state-of-art machines, but that did not stop him from winning 8 Sandows.

The secret to building the best back in the world? You cannot do it while lifting peanuts. Both Yates and Coleman were proponents of high-intensity heavy training.

Dorian Yates adopted the high-intensity training approach while it was considered overkill in the bodybuilding industry. Coleman, on the other hand, took this approach to a whole new level. His training videos are solid pre-workout motivation material.

3. You Never Heard Them Talking About Proportions or Symmetry

Big Ron and The Shadow have both won a perfect score on muscle proportion and symmetry at the Olympia, but they hardly spoke about the subjects during their prime.

The Olympia champs lifted heavy and let symmetry and proportions take care of themselves. Or at least this is what it looked like.

Apart from all the similarities, there is one big difference between Dorian’s and Ronnie’s training styles.

Dorian Yates lifted heavy but focused on muscle contraction with every rep. On the other hand, Ronnie just banged out heavy weights for reps.

Which approach is better? Your guess is as good as ours.

The 8X Olympia champ could contact his mid and lower back – something he often did on stage. We have never seen anything like that before him or ever since.

Next Read: Ronnie Coleman Trainer Shares Secrets To His Back Workout!

Before we get to the winner of the best back contest, let’s go over the workouts that helped Dorian Yates and Ronnie Coleman build their signature posterior muscles.

Yates is a master of high-intensity training. Here is the workout he followed to build a cobra back:

*Note: The first set will be a warm-up, followed by two working sets in each exercise.

Do not let the short workout fool you. DY had cracked the code of achieving maximum muscle stimulation with a small number of sets. If you are a beginner, you should do three working sets of each exercise.

Related: Dorian Yates Gives His Tips For A Sculpted Back

In his prime, Coleman had one of the most elaborate back workout routines. This is the training regimen that helped Coleman win 8 consecutive Sandows:

Ronnie Coleman performed the thickness and width workouts each week to bring out the size and detail in his back.

Related: Ronnie Coleman Trainer Shares Secrets To His Back Workout!

The Best Back Showdown

Now that we have discussed Ronnie Coleman’s and Dorian Yate’s history, strengths, weaknesses, and training techniques, let’s put on our judge’s hat and determine who has the best back in the business.

We will be assessing the two bodybuilders on three parameters:

The muscles primarily responsible for creating thickness are the upper back muscles: teres major, rhomboids, traps (upper, middle, and lower), and the posterior delts.

Each time Ronnie and Dorian hit the rear lat spread or rear double bicep, ridges and knots roamed, and stripes and crevices formed as these bodybuilders moved their arms. You could hear the crowd gasp and the camera shutters go off. It was a spectacle to witness. 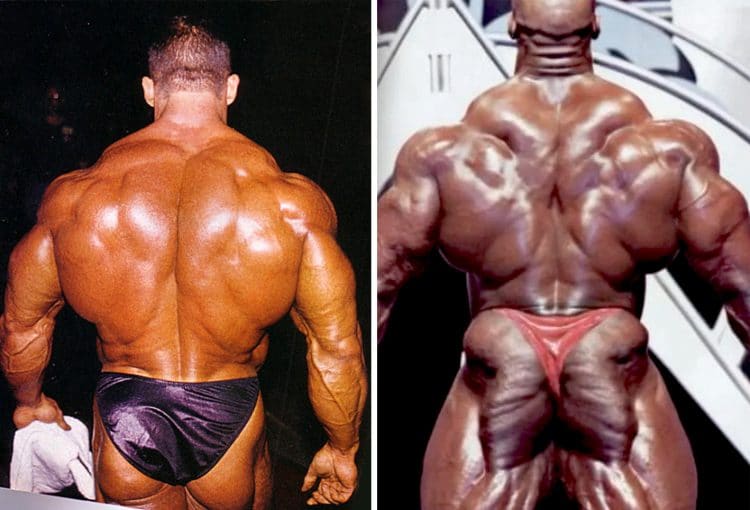 Result: Both Big Ron and The Shadow had ample back thickness. Since both athletes get a perfect score in this round, it is a draw.

The latissimus dorsi (lats) is the muscle primarily responsible for creating back width. It originates from the spine, where the fibers fan upwards and insert into the humerus.

Back width is the easiest round to judge in the best back competition. A glance at both athletes is enough to decide who has a wider back of the two. 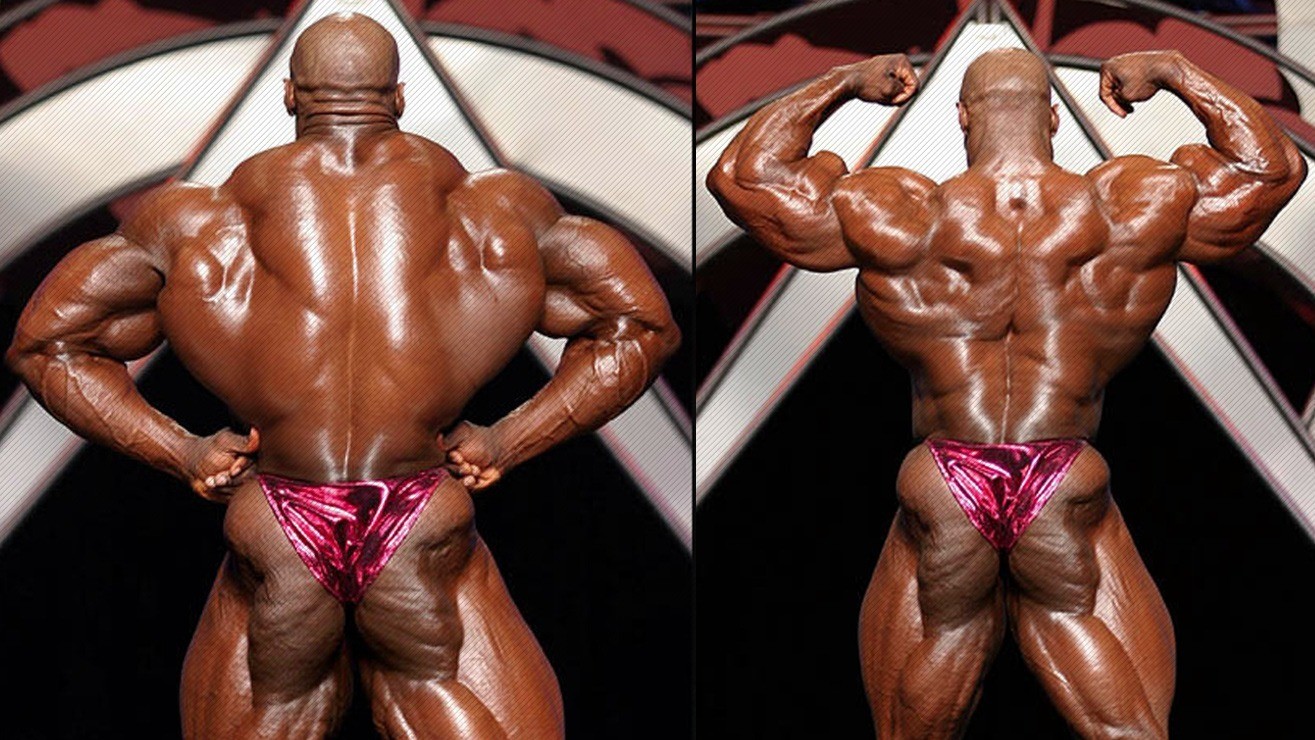 Result: Ronnie Coleman takes the cake in this round. I mean, the meat just hangs off Coleman’s back. It is crazy.

Honorary mention: Although “The Shadow” was not as wide as “The King“, there is one back pose that made Dorian Yates look like a Greek god – the front lat spread.

The structure of his anterior muscle chain and specifically his chest made his lats look humongous. It almost appeared as if Dorian could paraglide with those wings.

Back definition is one of the hardest feats to achieve. To have the best back in business, you need to have paper-thin skin and peeled conditioning to show off every intricacy of your back.

Whenever both of these bodybuilders turned their backs, the fans were greeted with a beautiful Christmas tree. Each arm movement on stage revealed muscles that we did not know existed.

Okay, out of the fanboy mode and onto the results now.

Result: Dorian Yates wins this round, hands down. Yates is famous for his dry, grainy, and zany physique. His posing routine was unique, and he missed no chance of showing off his muscle definition and striations.

Best Back Ever – Winner

Since the best back contest resulted in a draw, does that mean we have a tie?

Has the Mr. Olympia contest ever ended in a draw?

This is not one of those articles that will end in a draw to escape a hard decision.

You did not read all of this for nothing.

Like we discussed in the beginning, the problem with determining who had the best back is a little complicated in this case since both bodybuilders peaked at different times.

It would be unfair to rate Big Ron based on his performance in the 1991-97 era. But that does not mean we will compare The Shadow’s peak conditioning (1996) with Ronnie’s 2003 physique.

Let’s bring out the geek inside us for a few minutes.

Dorian Yates started competing in the pro circuit in 1984 and has won 15 out of the 17 shows he entered. His pro career lasted eight years.

On the other hand, Ronnie Coleman competed for 16 years in the pro circuit and won 26 shows out of the 66 he participated in.

Dorian Yates took a lot less time to achieve his full potential and stayed on the top of the circuit until he retired in ’97.

Rationale: Although Ronnie Coleman won more Olympia titles than Yates, we need to consider that his career lasted twice as long as Yates. While no fault of Big Ron’s, we cannot penalize the English bodybuilder for a short career.

We are sure if Dorian Yates had stayed in the game for eight more years, he would have given Big Ron a run for his money.

Although one bodybuilder trained in a cold basement gym in the UK and the other in a hot Texan gym, Ronnie Coleman and Dorian Yates have more similarities than we would have imagined. However, The Shadow marginally beat Big Ron in the best back contest.

Now that you know everything (training techniques and workouts) that goes into building a blockbuster back, what’s stopping you from drawing the curtains on the naysayers?