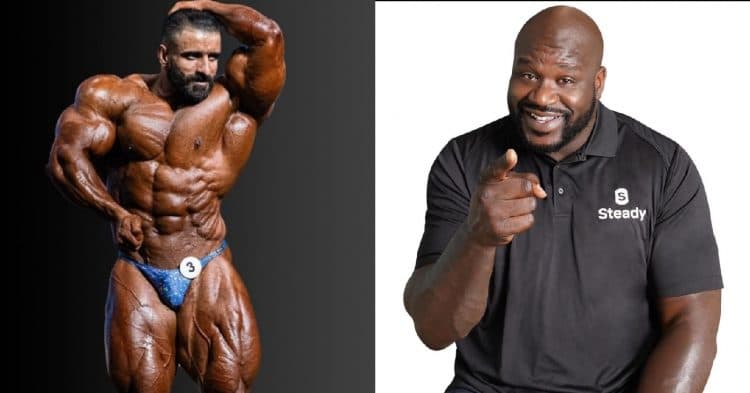 Dan Solomon is working to get Hadi Choopan to compete at the 2020 Mr. Olympia. Moreover, he and Shaq recently discussed the idea of having a celebrity pose off at the event.

Shaquille O’Neil has been a longtime fan of bodybuilding, even trying his hand a bit at training. That is why it came as a pleasant surprise that he was revealed to be an Honorary Ambassador for the 2020 Mr. Olympia contest. However, as he explained when doing a recent interview with Dan Solomon, this is not just an empty title for the basketball legend. He hopes to be able to do a celebrity pose off against none other than Busta Rhymes.

“You know what my dream would be? To stand on that stage and do a celebrity pose off,” Shaq said. “I would love to do it against Busta Rhymes. I know he gets trained by Dexter (Jackson), so me vs Busta Rhymes would be amazing. Listen, Busta is a friend of mine, so it would be a nice little competitive thing.”

This is certainly an interesting idea from Shaq, who is genuinely a fan of the sport. In fact, he watched the 2019 Mr. Olympia, and he felt that Hadi Choopan should have beaten out eventual winner Brandon Curry. However with the current global health crisis, it has been uncertain if Choopan will be able to attend the event, due to travel restrictions. While waiting on Shaq, Solomon provided a bit of an update on his efforts to get the Iranian into the country.

“I did catch up with Hadi’s trainer, Hany Rambod. We did catch up the other day, and talked a little bit about the scenarios around Hadi Choopan’s participation in the 2020 Olympia,” Solomon said. “We’re working real hard on getting him back. You can be sure, when we make the commitment to bring the best bodybuilders in the world to Las Vegas each year, we do so. We work very hard at it.”

Obviously it is going to be quite tricky to guarantee anything when it comes to Hadi Choopan competing at this year’s Olympia. He has had a difficult enough time getting into the United States when things were normal. Hopefully he can make it, and perhaps we can even see Shaq face off against Busta Rhymes. One thing is for certain though; this year’s Olympia is defined going to be one of the most exciting events of the year.