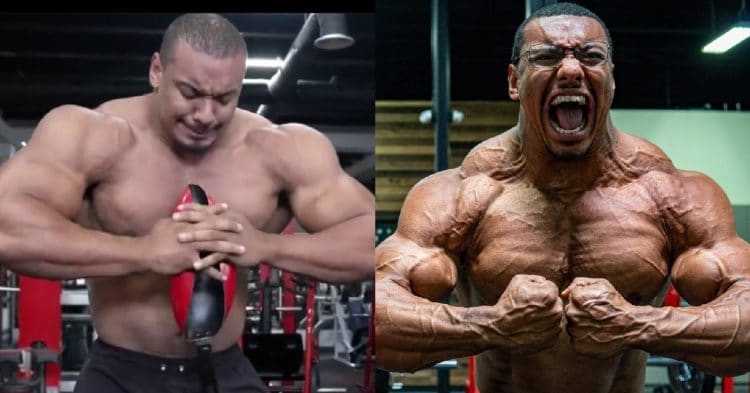 Someone as versatile as Larry Wheels has been known to put his skills to the test in all kinds of different ways. Recently he decided to try something new, by bending a frying pan in his bare hands.

At this point in his career, Wheels has attempted or trained nearly every strength sport there is. His unreal athleticism has led to him being successful in most of these endeavors, ranging from bodybuilding to arm wrestling, and of course powerlifting. He just shows time and again that he is ultra talented in almost anything related to fitness and strength.

Recently Larry Wheels decided to put his power to the test in a different way. He has been giving thought to moving into the world of strongman, and decided to try a new thing in preparation for that. Taking to his Instagram, he shared a video of his first attempt to bend a frying pan with his bare hands. He was able to do just that, completely rolling the pan like it was a toy.

“First time trying to bend a pan!
How quickly can you bend it?”

The activity of bending a frying pan is oftentimes one used by strongman athletes, albeit never in a serious way. Although there have been some pretty crazy world records set with this activity, so there is certainly some skill that comes with this activity. Wheels does a great job with this, but there is also no way of knowing the quality of the pan he used. Regardless this was a fun thing to see him try for the first time.

Larry Wheels is no stranger to trying a variety of unique ways to show his strength. Some days he might try rolling frying pans. However there are other days where you are more likely to see him in the gym using two adult men as weights for some dumbbell presses. The latter was the case a few days prior, where he did just that, as well as trying to overhead press them, which did not go as smoothly.

No matter what he is doing, Larry Wheels is always the type of guy to be entertaining to watch, while still blowing your mind. This frying pan incident was just the latest in a string of wild training sessions and obscure displays of his seemingly inhuman strength. No matter what activity he has planned for the day, you always know one thing: Larry will always deliver some fun content.