In the video, Bailey shares insights into building bigger legs. 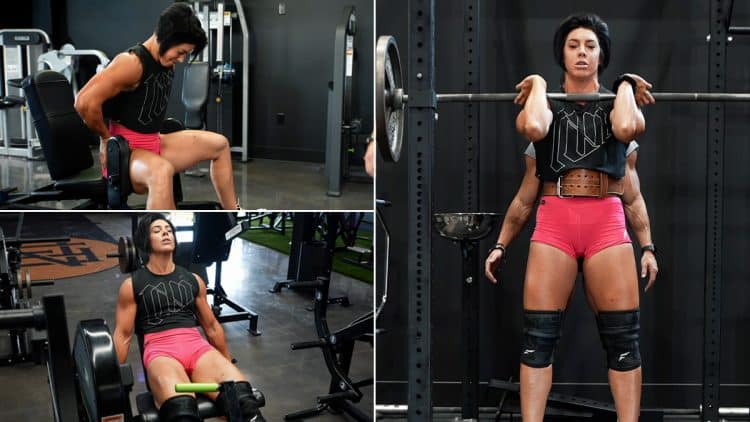 Dana Linn Bailey is the 2013 Women’s Physique Olympia Champion, winning the title in its debut year. Even after retiring from competitive bodybuilding, Bailey continues to train rigorously. She has trained with some of the best bodybuilders and has a vast store of bodybuilding knowledge. A whopping 500 thousand-plus subscribers on her YouTube channel are a testimony to the quality of the content she shares.

Recently, Bailey was joined by bodybuilder Kristen Nun for a high-volume leg day workout. So without further delay, let’s take a look at the detailed account of this session that was uploaded on Bailey’s YouTube channel.

Front squat and back squat

Bailey decided to do both front and back squats in this workout. Since most people can lift more weight in the back squats, Bailey devised a way to put in equal amounts of work in both variations.

Bailey performed four sets of squats using this principle and jumped to the next exercise.

After working the lower body sufficiently with squats, Bailey felt comfortable performing an isolation exercise. She started with leg extensions on a plate-loaded machine to target the quads and performed four sets. Each set consisted of 10 full reps and 10 partial reps. The purpose of this exercise was to pre-exhaust the quads for the workout.

“Whether (partial reps) are at the top or the mid-range, you’re just going to make it a small movement – a half rep. So you’re not really coming down. You just keep building the blood into the quad, and then after that, we’re going to hit a quad-focused squat of some sort,” Bailey said.

Bailey next performed this exercise to work the quads and hamstrings. She explained that the range of motion of the machine she uses is so accurate that it doesn’t even require her to use heavy weights. Additionally, one can put more emphasis on hamstrings or quads depending on the foot placement.

Bailey positioned her legs shoulder width apart with toes slightly pointed out and went all the way down for every rep. She cranked out four sets of this exercise and moved on to the next one.

After working the quads, it was time to force all the blood into the hamstrings for the next few exercises. For this, Bailey started out with leg curls. She did this exercise with the orthodox form. However, while speaking about the range of motion and form, Bailey said:

Bailey performed four sets of 12 reps on the leg curl. However, for the last rep of the final set, Bailey held the curled position for as long as she could while her training partner pressed down on the weight stack to keep the muscles under tension for a longer duration.

Belt squat on a plate-loaded machine

Bailey next took to the belt squat on a plate-loaded machine for working the hamstrings and glutes. She assumed a sumo stance and kept her feet pointing out and her hands in front at shoulder height.

For those who do not have access to this machine, Bailey advised performing barbell deadlifts or goblet squats. She performed four sets of 12 reps on this exercise.

Bailey finished her leg day workout with this superset. She performed four sets each of both exercises. She did 12 reps on the hip thrust and maintained a 15 to 20 rep range for hip abduction on the machine.

Bailey kept her head leaning forward throughout the range of motion for the hip thrusts instead of throwing it back against the pad. This helps activate the abs along with the glutes.

“Both ways are fine. You just pick the way you like to do it that you feel in your butt a little bit more,” Bailey said.

While explaining the right way to do the hip abduction on the machine, Bailey said:

“Slow instead of just ripping through these, which I can do a lot of weight if I just rip. We’re gonna slow the weight down, and you should be able to hold it [in the extended position].”

She further demonstrated that you could do hip abductions with heavier weights if you perform the reps fast while relying on momentum. However, she advised the viewers to slow it down if the goal is to get maximum benefits.

She performed all the sets in this superset with rapid succession and minimal rest periods in between and wrapped up the training session.

Dana Linn Bailey is one of the most influential female bodybuilding personalities on social media. The former Women’s Physique Olympia champ’s content is a potent source of pre-workout motivation for her over 2.5 million combined followers on Instagram and YouTube. Partnering with other bodybuilders for workouts on a regular basis shows her dedication to the craft.

There are over 600 muscles in the human body. Some, like the gluteus maximus, are large, strong, and obvious. Others...