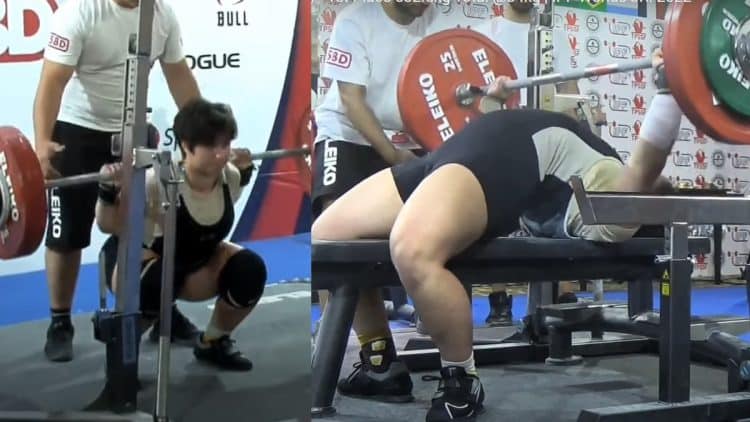 At the start of this year it seemed like Jessica Buettner (76KG) and Amanda Lawrence (84KG) were unmatched in their respective weight classes. However, Agata Sitko emerged and made the situation very complicated, especially for Jessica. Sitko has now furthered her path to being considered as the greatest powerlifter of both weight classes, after she was crowned the best female athlete at the 2022 IPF World Sub-Junior and Junior Powerlifting Championships.

Agata Sitko has slowly become a tradition of breaking a World Record every time she competes, a feat she achieved at this competition as well. Agata did so by bench pressing 147.5 kilograms (325.2 pounds), which is a new U84KG IPF World Record in the Open division (all age groups). This is her third raw IPF Open World Record, with many more in the equipped and Junior divisions.

Agata Sitko did not simply outperform the previous record, but instead smashed it out of the park. She broke the record by a 10.5-kilogram (23.1-pound) margin, as Melo Daniella lifted 137 kilograms (302 pounds) at the 2019 IPF World Classic Powerlifting Championships. Unluckily for Daniella, Agata decided to jump up to the 84-kilogram weight class, which turned out to be incredible for her.

Agata Sitko barely missed competing in the 76-kilogram weight class, having weighed in at 77.85 kilograms (171.6 pounds) for the 2022 IPF World Sub-Junior and Junior Powerlifting Championships. However, those few pounds might have made a ginormous difference which enabled her to set another World Record. In addition, Agata scored new bench press and deadlift competition PRs.

*Agata Sitko has a heavier squat competition PR of 202.5 kilograms (446.4 pounds), which she set at the 2022 IPF World Classic Powerlifting Championships.

*Agata Sitko has a heavier Total Competition PR of 585 kilograms (1,289.7 pounds), which she set at the 2022 IPF World Classic Powerlifting Championships.

It has been an extremely busy year for Agata Sitko, as she has participated in seven powerlifting competitions. A total of 17 appearances followed, with 11 victories.

Now a multiple-time IPF World Champion, Agata Sitko seems like the most diversely capable powerlifter currently active. She is able to compete in both the raw and equipped division, while her recent performance is proof that weight classes do not limit her. Despite competing more often this year than powerlifters usually do, we don’t know if she will compete again soon.