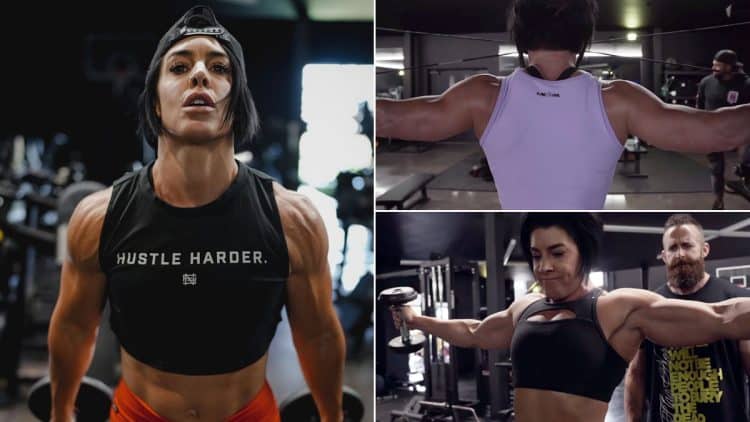 Former Women’s Physique Olympia champion Dana Linn Bailey went through a punishing shoulder workout with Joe Bennett and her husband Rob Bailey. “DLB” is a bodybuilder, fitness model, and social media celebrity. She is a pioneer of the women’s physique division and won the first-ever women’s physique contest in IFBB history—the 2011 Jr. USA. She then went on to win the inaugural Women’s Physique title at the 2013 Olympia.

DLB has over 2.5 million followers on YouTube and Instagram combined. She routinely collaborates with athletes from the fitness industry and was joined by her husband, Rob Bailey, and famous bodybuilding coach Joe Bennett for a shoulder workout.

Popularly known as the ‘Hypertrophy Coach’, Bennett is widely praised for his muscle hypertrophy-inducing training techniques. Bennett trains the 2022 Arnold Classic Classic Physique winner Terrence Ruffin and is currently helping “Ruff Diesel” prepare for the 2022 Olympia, scheduled for Dec. 15 to 18 in Las Vegas, NV. Bennett has previously worked with WWE superstar Dave Bautista for his role as Drax in the Marvel movie Guardians of the Galaxy (2014).

Bailey has done several videos with Bennett for her YouTube channel and joked that he ‘tortures’ her with his workouts every time they train together. So without further delay, let’s take a look at what Bennett had the couple go through in this shoulder training session.

While performing the exercise, Bailey reminisced about training with Bennett for the first time and said:

“I remember the first time I trained with this dude. He’s like, ‘we’re gonna do three exercises,’ and I was like – ‘We’re never gonna get jacked doing three exercises.’ Then I did three simple biceps exercises, and I was crying!”

Bennett instructed the Baileys to hold the contraction position for as long as possible at the beginning of every set while performing the dumbbell incline rear delt fly. This was followed by full reps and they finished the sets with a few partial reps.

After working the rear delts, the trio shifted their focus to this compound exercise. Besides the deltoids, the shoulder press works the pecs, triceps, and trapezius (upper back). Also, they are one of the most popular upper body movements in gyms around the world.

The trio super-setted the machine shoulder press with the dumbbell lateral static hold for the final set of the exercise. Holding the weight to failure helps achieve muscle hypertrophy.

Bennett guided DLB and Rob through a giant set of five cable exercises as a finisher to the shoulder training mayhem. Cable Y raises are a potent exercise to work the traps and rear deltoids. Performing shoulder exercise while lying on the floor removes the use of momentum and helps concentrate on the target muscles to a greater degree.

The trio started the giant set with the seated high pull, then switched to the face pull. For the lying exercises, they started with the cable upright row, progressed to the cable front raise, and finished with a few lying shoulder presses.

DLB is one of the most influential female fitness personalities on social media. Her content is definitely a source of positive motivation for anyone looking to lead a healthy life. Who would you like to see her collaborate with next? Sound off in the comments!

You can watch the full workout video below, courtesy of Dana Linn Bailey’s YouTube channel: