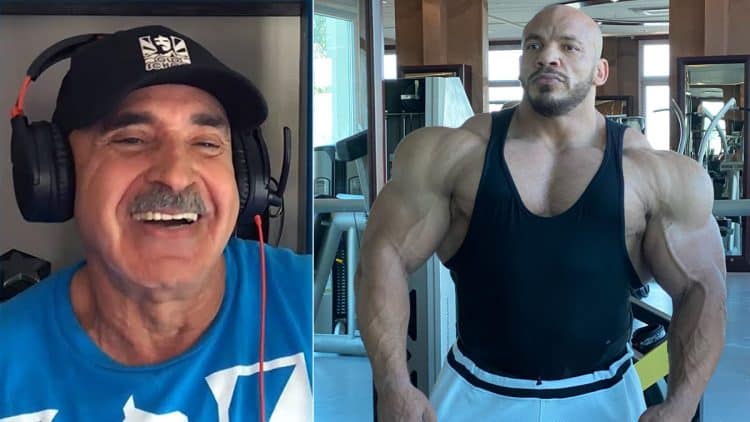 Mamdouh ‘Big Ramy’ Elssbiay faced criticism from the bodybuilding community for possibly injecting oils like Synthol in his delts. Adding to the dilemma, Ramy’s coach talked about his back deteriorating from a nerve issue. In a recent video uploaded to YouTube, Nick Trigili, Samir Bannout, and John Hansen gave their thoughts on Ramy’s back and delt development.

Big Ramy rose to prominence with his gigantic frame and muscularity. He brought unparalleled size to the Men’s Open division in 2020 and won his first Sandow trophy by dethroning 2019 Mr. Olympia Brandon Curry. Ramy returned the following year to retain his title at the 2021 Mr. Olympia. Although he defended the title, there were concerns that he had slipped since the last time he was on stage.

The two-time reigning Mr. Olympia came under fire for missing a guest posing appearance at the 2022 Pittsburgh Pro earlier this year. Ramy issued an apology to the IFBB Pro League and President Jim Manion for the failed obligation. He sparked concerns surrounding his commitment to the sport when he announced his plans to retire at 38, indicating that he will hang up his posing trunks in 2023.

Last month, Ramy put his competition on notice after sharing a physique update where he tipped the scales at 337 pounds. He posted another update last week, showing off his massive width and shoulder development. Some fans were left confused by his pointy delts and speculated whether any site enhancement oils were used.

In a recent video uploaded to the YouTube channel of Old School Labs, Trigili, Bannout, and Hansen shared their thoughts on Big Ramy’s recent changes. Nick pointed out the sharp decline in Ramy’s back and theorized a nerve issue to be the reason for it.

“This is Chris Cormier’s theory. When you get so big, the muscle starts actually putting a lot of pressure on the nerves and it could potentially, not like turn off the nerves completely, but cause problems with the nerves firing if you don’t break up that scar tissue, and release that and get blood flow.

They are hoping that fixes it but if you look at Ramy’s back, it’s a drastic difference between the New York Pro and now. It’s almost like there’s a line across the middle of his back where it just stops, there’s no muscle anymore,” Trigili said. “The therapist said that it’s coming from his traps and that’s why his back isn’t firing there.”

Bannout had an important message for the Egyptian, recommending he take a year off and resolve the issue before returning to competition.

“I would look after Ramy’s health right now because he’s young. If he resolves that problem he’s not going back anywhere. Dexter Jackson was winning contests at 50. So if Ramy takes a year off and takes care of that issue and come back, he’s still fine. We need to look after his health,” Bannout said.

The trio reviewed Ramy’s latest physique update that had the fans wondering if he used Synthol or something similar. Nick highlighted how the growth in his shoulders threw off the symmetry of his chest.

“His shoulders destroy his chest now because look at the imbalances that it caused now. The lats don’t look anything like they used to either. He’s very shallow now in the chest area.”

“I drew a line from one delt to the other one, and the line went like this *points diagonally* because one delt was so much higher than the other one. I just want to show people, this is not normal for delts to grow like this, they don’t grow in that direction.”

While there is no proof that Big Ramy injected Synthol or such compounds, it is evident that his physique has undergone changes. With about 15 weeks left for the 2022 Mr. Olympia, Ramy will be looking to add a third title before stepping away from the sport professionally.

RELATED: Dennis James on Coaching Big Ramy for 2022 Mr. Olympia: ‘I Guarantee You, This is Going to Be the Best Ramy Ever’