In a crazy training session, Larry Wheels hit a couple of insane sets of the incline bench press, leading to a new all time personal best 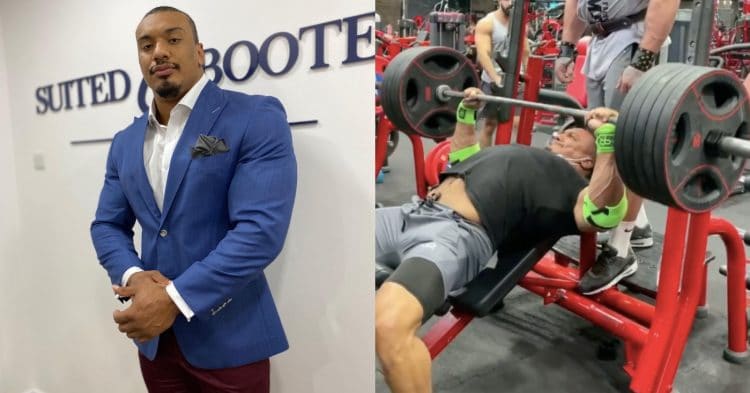 They call Larry Wheels the personal record wrecking machine, and it is not hard to understand why. If you somehow missed why this is the case, he decided to remind you with an epic incline bench press session in the gym.

It seems like every time Wheels steps foot in a gym, it is with the intent defy all logic of what should be humanly possible. The powerlifter has shown countless skill over the years, crushing whatever obstacles are put in his way.

Most recently, we have been seeing Larry put a lot of focus into arm wrestling, but he wanted to make it clear that he can still move some serious weight when the occasion calls for it.

Taking to Instagram, Larry Wheels cranked out a session on the incline bench press. Not only did he do a baffling 50 reps at 100kg (225lb), but he also managed to press 220kg (485lb) for 7 reps, earning a new all-time personal record.

That was a top notch performance from Larry Wheels, who showed exceptional cardio in doing those 50 reps. That is to say nothing about the incredible personal record that he hit with the seven rep set.

This comes after Larry made a renewed commitment to strength training to kick the year off. As previously stated, he had been dabbling in other things like arm wrestling, but wanted to get back to focusing on the weights.

To kick off this motivation, Wheels was seen doing a hefty 760lb deadlift triple. While this was no personal record, it was still a solid and impressive return to form for the always versatile and exciting Larry.

At the end of the day, Wheels is going to be exciting and fun to watch, no matter what he is doing. However it is safe to say that his skills lend themselves to powerlifting the most, so it is nice to see him focusing on that again.

Another interesting thing that we had been seeing from Larry recently, was the strict curl. Perhaps he will be making an effort to keep pumping those numbers up, now that he is back to focusing on strength training.

If this is the route he chooses to take, the next step would be to see Larry Wheels compete in the strict curl even that is coming to the 2021 Arnold Classic. If he does show up there, he is a top contender to win the event.