Kyle Kirvay is performing incredible amounts of repetitions with enormous weight in the gym. 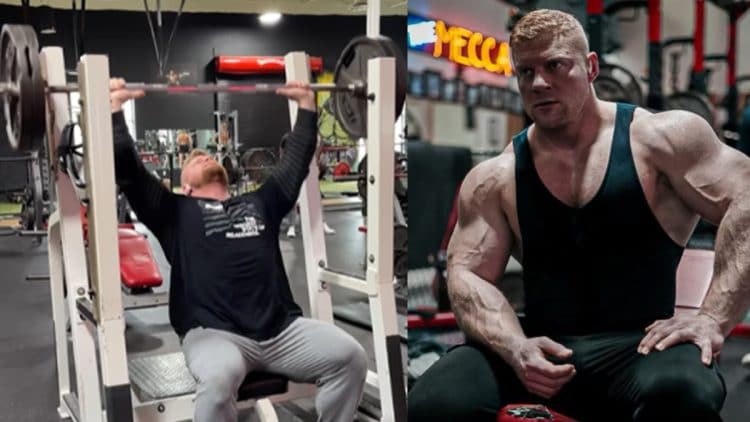 Kyle Kirvay is a professional bodybuilder who recently turned to powerlifting due to his incredible strength. It seems like he found the perfect balance between two sports, as he is lifting a staggering amount of heavy weight and is doing unfathomable amounts of reps. This is slowly becoming Kyle’s thing, having recently gone viral for his 495 lbs (224.5 lbs) x 22 reps squat. However, his recent feat of strength is arguably even more impressive, as Kyle has loaded 225 lbs (102 kg) on the barbell and performed 20 repetitions of shoulder press with speed.

Kyle Kirvay did not use wrist wraps or any other equipment to aid him in the lift, but maintained a perfect form throughout all 20 repetitions. He fully locked out every rep and his elbows broke parallel on the lowest point of the lift. Kyle was also sitting completely upright, which makes his exercise a strict shoulder press. After comfortably locking out the final rep, Kyle took his cap, and stood up without taking even a second to breathe.

‘Powerbuilding’ is a modern term used for athletes who are combining the sports of powerlifting and bodybuilding. Kyle Kirvay is the perfect example of this, and alongside Larry Wheels, probably the best to do it currently. He is currently 27-years-old, and although he is still young, Kyle has accomplished a lot in his career.

Kyle received his IFBB Pro Card in two distinct divisions in 2018. He earned it by winning the Men’s Heavyweight and Classic Physique at the 2018 NPC Universe Championships. Kyle Kirvay only took part in three competitions prior to winning his Pro card, and stood on the podium twice. Both were at the 2017 NPC Steve Stone Metropolitan Championships. As an IFBB Pro Bodybuilder, Kyle only took part in the 2020 IFBB Chicago Pro, where he placed 16th.

Kyle Kirvay’s powerlifting journey just started this year, having competed at the 2022 USPA Battle at Atilis. As it is his only competition, all of his official PRs are from it.

Kyle Kirvay has previously stated that he plans to continue competing in both sports, and we could see him stepping onto the bodybuilding stage or a powerlifting platform sometime this year. Nonetheless, Kyle Kirvay’s shoulder press is beyond impressive and proves that he is making some serious progress in the gym.