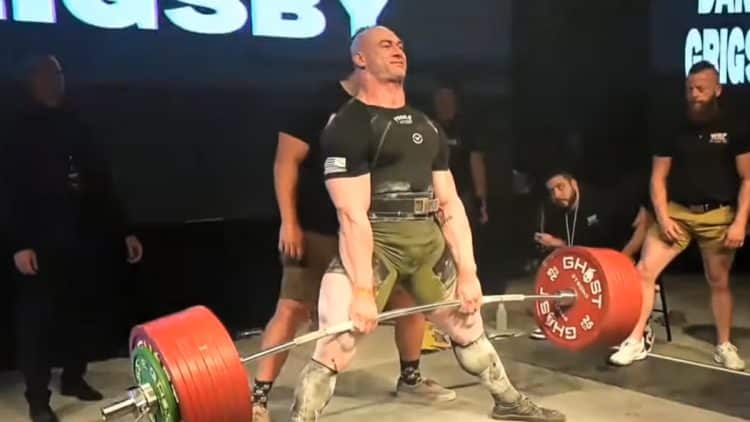 The 2022 WRPF American Pro took place in Manassas, VA on July 29-30, 2022. It featured amazing performances from powerlifters like John Haack, Blake Lehew, Tamara Walcott, and more. However, one guy managed to outshine them all with arguably the greatest lift in powerlifting history. That was Danny Grigsby, who blew everyone’s mind with a 487.5-kilogram (1,074.8-pound) raw deadlift.

Not only did Danny Grigsby break the All-Time World Record in the 125-kilogram weight class, but he also scored the absolute heaviest official raw deadlift in history.  At the moment, he is aiming for a 500-kilogram (1,102.3-pound) deadlift, and his recent lift was heavier than those of many Strongman competitors who use lifting straps and deadlift suits.

Both 2017 WSM Eddie Hall and 2018 WSM Hafthor Bjornsson have been successful in pulling 500 kilograms. It’s obvious that strongman standards are different from powerlifting, which is why Danny’s recent lift is so impressive.

Danny Grigsby also held the previous U125KG All-Time Deadlift World Record of 440 kilograms (970 pounds), which he set at the 2021 WRPF The Bucked Up Showdown. However, he has now further improved it by 47.5 kilograms (104.7 pounds).

Danny Grigsby posted an Instagram story following the competition about his satisfaction with his performance.

For the 2022 WRPF American Pro, Danny Grigsby moved from 140-kilogram to the 125-kilogram weight class. He weighed in at 121.7 kilograms (268.3 pounds), so he could have added another 3 kilograms of bodyweight. Danny was successful in eight lifts, missing out on his final bench press that he didn’t even try to lift.

Check out all of Grigsby’s lifts here

In his nine-year career, this was Danny Grigsby’s 15th official appearance. Aside from 11 victories, he also finished on a few podiums. Danny also holds deadlift World Records in both 125 and 140-kilogram weight classes.

Powerlifter Danny Grigsby’s 487.5-kilogram (1,074.8-pound) deadlift is probably the greatest feat of strength of the modern era. Aside from his impressive lift, he also stands out for his grip strength. Some athletes like Jamal Browner and Krzysztof Wierzbicki have lifted heavier than Danny, but they did it in training and lifting straps which are not allowed in powerlifting. Danny Grigsby, on the other hand, only used a lifting belt to aid him in the lift.