Danny Grigsby has claimed yet another personal record and made it look easy. 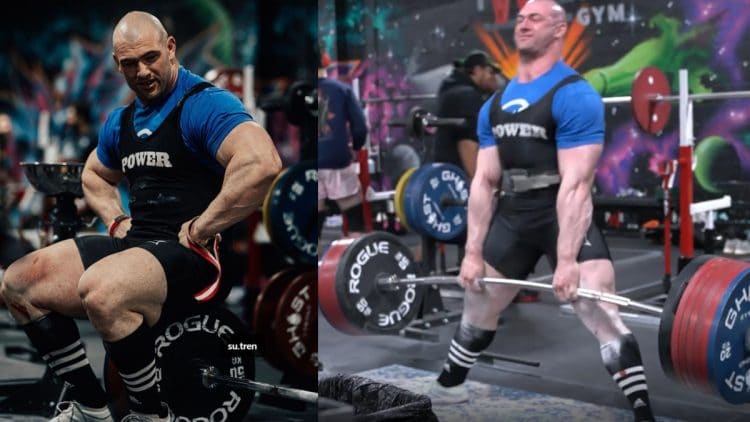 Danny Grigsby’s training is going extremely well, and he is making constant improvements each week. Ever since claiming the All-Time Heaviest Raw Deadlift in powerlifting history, Danny can’t stop improving, whether it is breaking personal or World records. His tank is so full of energy which can be seen in his recent training sessions. And on April 17th, Danny shared a video on his Instagram, pulling a humongous 915 lbs (415 kg) deadlift. This would be impressive by itself, but in the process Danny managed to plow through three reps, claiming a new PR. Danny did not specify his bodyweight at the time of the lift, but just two weeks ago he weighed in at 125 kg (275 lbs).

Danny Grigsby only used a lifting belt, which means that this lift would be considered as raw by powerlifting standards. He also pulls with a sumo stance and a hook grip. All three reps looked very comfortable for him, and it seems like he has a few more in the tank. However, Danny is doing only what is planned beforehand, so even if he can lift more, he will still stick to the plan for optimal improvement. While watching him lift, it is incredible to see how huge his legs and forearms are.

Even with 915 lbs (415 kg) loaded on the bar, Danny was extremely explosive, and on the second rep, we could see him scrape his left leg, which immediately left a bloody mark. Danny also expressed that his confidence had been boosted recently, which could be the reason for his recent breakthrough.

“It’s been great this last year to actually be able to train as consistently as I’d like. I’m starting to become a lot more confident overall with my training.”

Danny Grigsby is not openly talking about his desire to deadlift 500 kg (1102.3 lbs), but he is definitely one of the biggest favorites to achieve this feat. If anything, Danny is officially the closest powerlifter to the half-a-ton mark. Jamal Browner and Krzysztof Wierzbicki are the only powerlifters who could deadlift as much as Danny, and they both revealed their desire for the 500 kg (1102.3 lbs) pull.

If Danny Grigsby decided to chase this feat of strength, he could become one of only three people in history to have lifted it. Eddie Hall was the first one as he lifted exactly 500 kg (1002.3 lbs). Hafthor Björnsson then claimed the World Record by deadlifting 501 kg (1004.5 lbs). Multiple Strongman competitors are also attempting to lift it, but Ivan Makarov seems to be the closest.

Danny Grigsby is currently 28-years-old and weighs around 125 kg (275 lbs). He usually competes in the 125 kg weight class, but for his last contest, he took part in the 140 kg division. Throughout his career, Danny has claimed the All-Time World Record Deadlift in both weight classes.

Danny came out victorious in 11 of 14 competitions in which he took part in. Most notably, he won the 2022 USPA Virginia Beach Classic 2, 2020 USPA Iron Mongers Pro Day, and the 2019 USPA California State Championships.

We are witnessing history in the making with Danny Grigsby. We also have the chance to see his progression in real-time instead of waiting for him to compete. Judging from Danny’s training sessions, it would not be surprising to see him improve the World Record even more.