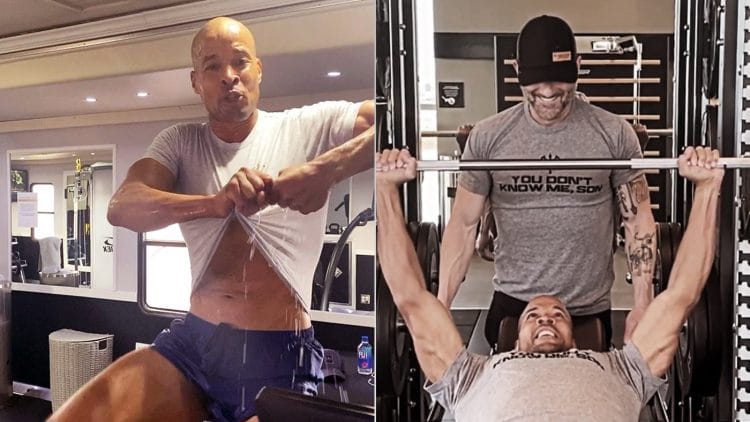 Former US Navy Seal and Ultramarathon runner (and Joe Rogan favorite) David Goggins can easily be classified as the man who inspired millions to let go of procrastination and chase their dreams. As we know by now, Goggins brings sheer will and furious intensity into every single workout and training session. Therefore, it’s not surprising that very few human beings can go toe to toe with the 46-year-old in the gym.

However, if a person can make for a perfect training partner for David Goggins, it has to be Cameron Hanes. A former municipal and water company employee, 53-year-old Hanes, is also a famous endurance runner and a backcountry bowhunter. As seen in a recent video on Cameron Hanes’ Instagram account, Hanes and David Goggins joined forces for what appears to be an intense chest and arms workout.

Both men, wearing similar t-shirts with the phrase ‘you don’t know me, son!’ can be seen doing bench press followed by dumbbell press and banded bicep curls in the video. A hyped-up David Goggins closed the video with a message to followers in his trademark style which would certainly get a lot of people off the couch:

“Motherf*s think they can just say, I’ll be ready when the time presents itself. F* that, mother*!”

As expected, the video was widely appreciated by Instagram users for its motivational value. One of the most liked comments on the post read:

“It should be mandatory for these 2 to workout minimum once a month, on National TV and into every school’s gym class.”

Named as the ‘Hero of Running’ by Runners’ world in 2008, David Goggins started long-distance running to raise money for the Special Operations Warrior Foundation after he lost his friends in a helicopter crash in Afghanistan in 2005. The Foundation provides scholarships and grants to children of soldiers who sacrificed their lives in special operations.

Having competed in several endurance challenges and prestigious competitions like Badwater Ultramarathon multiple times, Goggins has raised over $2 million for the foundation. Over 16 years, Goggins’ name has become synonymous with endurance training and motivation.

While revealing the secret to performance longevity and constant improvements in his physical and mental abilities over the last two decades in one of his Instagram videos, David Goggins stated:

“Negotiating with yourself is the root of all evil. It’s a fucking cancer. If you are a person who wakes up everyday wondering why you are in the same position you have been in for years, I can almost guarantee you it is because you were in the negotiation phase of your life for too long.”

Will Smith continued his recent fitness journey by joining NFL quarterback Tua Tagovailoa for strength training. With the intention of dropping...