Hafthor Bjornsson was happy with his first round finish over Devon Larratt, but Eddie Hall was not impressed 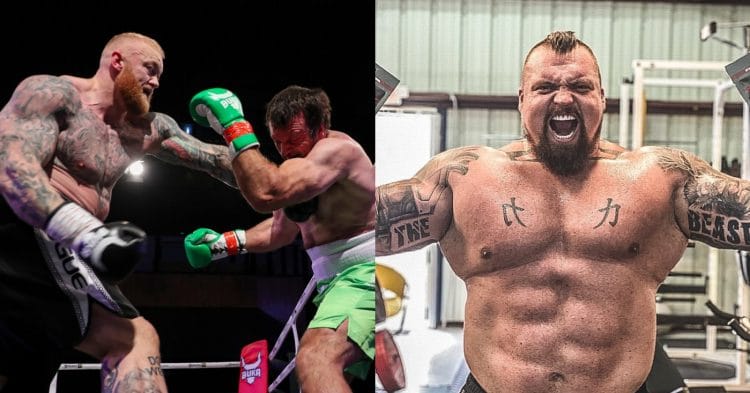 Over the weekend, Hafthor Bjornsson had his first pro boxing fight, beating arm wrestling champ Devon Larratt in the first round. While he felt good about this win, it seems that his rival, Eddie Hall was not impressed.

Bjornsson was initially supposed to fighting Hall over the weekend, in a bout that had been building up for over a year. However when Eddie was injured, Larratt stepped up on five week’s notice, to fight the former World’s Strongest Man in both men’s pro debut.

In the end, despite how confident Devon seemed in the build-up, Hafthor was able to overwhelm him in the first round, earning a standing TKO. Following this first pro win, Thor posted to his Instagram to reflect on the win, and show appreciation to everyone involved.

“Thank you everyone for the support and messages the last 24 hours. Last night I went straight to my hotel room and passed out. Last night was amazing and I’ll be forever thankful for the experience. There’s no better feeling then the adrenaline you get running through your body when stepping into the ring,” Bjornsson wrote.

“Thank you @devlarratt for the battle and bravery. You are a champion. Thank you to my whole team, my coach, my wife and all my fans!”

Following this performance from Hafthor Bjornsson, it came as no shock that Eddie Hall had some things to say. While he was not able to make the fight, he had been talking trash about Thor before the fight, and that did not change after the contest, either.

He shared a post to his own Instagram mocking the Mountain for beating a man who only had five weeks to prepare, had joint issues, and had never fought before. However he was sure to praise Devon Larratt for having the willingness to take the fight in the first place, knowing that he was probably going to be overmatched.

“Well done to Thor for beating an old man up with 5 weeks training. Outstanding!” Hall wrote in a Facebook comment, sharing a screenshot on Instagram and adding:

The plan is for Hafthor Bjornsson and Eddie Hall to have their bout rescheduled for the beginning of the year, giving Eddie time to finish recovering from his bicep tear. When that bout does take place, it is going to be exciting to see them finally settle their beef.