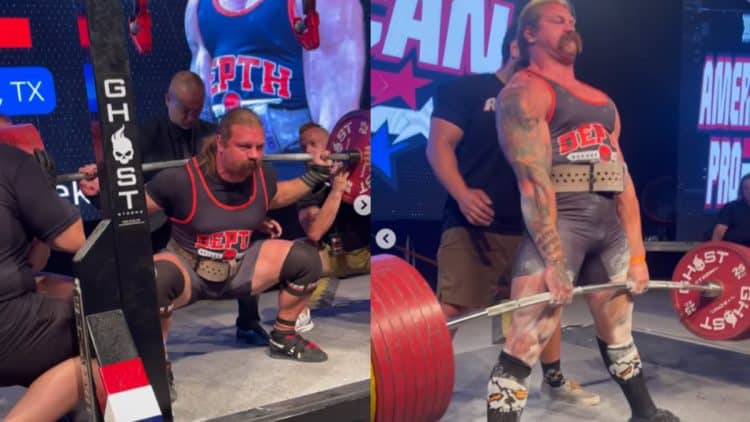 A number of athletes stand out because of their distinctive features that make them more recognizable and entertaining. In the case of Derek Thistlethwaite, his unique physique, long hair, and magnificent mustache are his trademarks. In addition to being a very powerful man, Derek is also an elite powerlifter, which he proved at the 2022 WRPF American Pro. Derek put on an amazing show and won the raw 110-kilogram weight class. Apart from emerging victorious, Derek also claimed an All-Time Raw World Record.

Derek Thistlethwaite put up his greatest performance yet at the 2022 WRPF American Pro and improved all of his competition PRs. He first squatted 372.5 kilograms (821.2 pounds) quite comfortably and followed it up with a massive 220-kilogram (485-pound) bench press. To wrap his competition up, Derek deadlifted 410 kilograms (903.9 pounds). So, his total came out to 1,102.5 kilograms (2,210.1 pounds), which is a new All-Time World Record in the 110-kilogram weight class. Jamal Browner held the previous record of 1,000 kilograms (2,204.6 pounds), which he set at the 2021 WRPF Hybrid Showdown III.

Derek Thistlethwaite weighed in at 109.4 kilograms (241.2 pounds) for the 2022 WRPF American Pro, which is also the heaviest he has ever been in a competition. He first decided not to attempt a third squat attempt out of a sense of not wasting energy. However, he then failed one bench press attempt and two deadlift attempts. It all turned out great for Derek, but it is evident that he has a lot more room to further improve his Total World Record.

You can watch all of Derek’s attempts here:

Derek Thistlethwaite’s first powerlifting competition came in 2016, where he finished in fourth place. He then took a break until 2020, which saw him come back almost 30 kilograms (66 pounds) heavier and much stronger. Two years after returning to the sport, Derek has won all six sanctioned competitions he has entered.

There seems to have been a great rivalry created between Derek Thistlethwaite and Jamal Browner this weekend, but it will probably last for many years. Jamal’s deadlift can overshadow all of his flaws, while Derek is a very solid lifter across all three events. He can still cherish one of the highlights of his career even though Derek’s new record may not last long since both he and Jamal will likely improve.