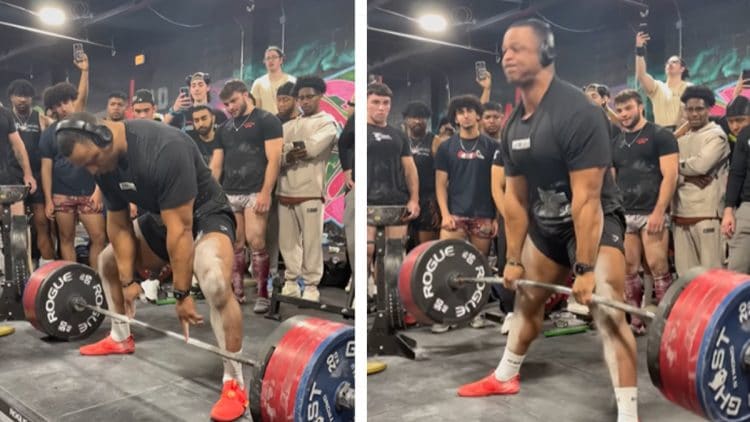 Jamal Browner is once again setting new PRs in training. It seems like he pushes his limits every week, mostly displaying his deadlift prowess. He is definitely one of the strongest pound-for-pound deadlifters on the planet, as pulling  400+ kg (881.8+ lbs) looks extremely easy for him. On February 12, 2022, Jamal posted an epic 410 kg (904 lbs) deadlift triple on his Instagram page, which is his new Rep PR.

The scariest thing is that these deadlifts looked very comfortable, and it seemed like he could squeeze a few more reps in. Jamal deadlifted with a sumo stance, and he only used a lifting belt. The hype in the gym was also surreal, which undoubtedly gave Jamal a bit of an adrenaline boost.

“Technique has been on point for the past few weeks.”

Jamal Browner competes in the 110 kg category, and holds Two World Records. Ha has taken part in 15 sanctioned competitions so far, of which he won 10. He is also only 27-years-old, meaning a lot more competitions are still to come. His greatest performance was in the 2020 WRPF Hybrid Showdown II, where he won the competition and set two world records. After that, Jamal suffered a quad injury which slowed down his progress, but now he is back at his full capacity.

Currently, he is mixing up sumo and conventional deadlifts, and just a few days ago, Jamal pulled 410 kg (904 lbs) raw and with a conventional stance.

There are people who dislike the sumo stance deadlifts, but they have some significant benefits.  Sumo deadlifts suit Jamal the best, but he is also very good in conventional. However, sumo activates different muscle groups, allowing him to train harder. Being one of the best deadlifters in the world, a lot of his fans have asked for tutorials on sumo pulls, so he published a video explaining tips & tricks to get better.

All the tips work for Jamal Browner but are not guaranteed to work for other people, and everyone should accommodate their own needs.

Stance width – Jamal sets the edge of his shins close to the rings that are engraved on the bar.

Grip – There are three types of grips, but Jamal only uses the hook grip. With the hook grip, you should overlap the middle and index finger over the thumb. The other two grips are the double overhand and mixed grip, but they can ruin the balance of the pull significantly.

Treat the deadlift like a leg press – Jamal explained that the aim of the deadlift is not just to pull, but also to push off the floor. That activates the quads and glutes, instead of overloading the hamstrings and lower back.

“Every lift is a press… You are pressing yourself off the ground.”

Hip shoot – Jamal is recognizable for this. Before every pull, he grips the bar, lifts his hips up, then lowers them down until he feels most comfortable. With this, he makes his arms as long as possible, making the lift easier. The second advantage is that he can find the right position to activate more muscle groups.

Knee lockout timing – You should not aim to lockout the knees as fast as possible. This would make it a stiff leg sumo deadlift, which can seriously strain the lower back

Head positioning – Jamal holds his head in the neutral position. Wherever his torso is pointed, the head will be too.

Lat activation – Trying too hard to flex the lats can limit the lifting abilities. Jamal suggests just pointing the pinky finger towards the body once you grip the bar. Same thing can be used in the bench and squat as well. Just try to “bend” the bar.

Jamal Browner is currently mixing up the conventional and sumo deadlifts in training, and it seems to work extremely well. Setting new PRs every week makes us eager to see him compete again as soon as possible. Jamal has not revealed when he will compete next, but if he continues to progress with this speed, then we are bound to see some historic lifts.