Dexter Jackson Shares Another Of His Best Bodybuilding Diet Recipes 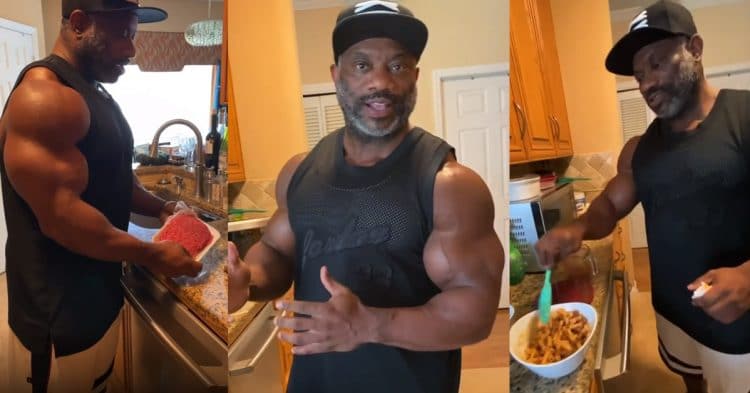 With such difficult times for everyone right now, it can be especially challenging to maintain a normal fitness lifestyle. That’s not to say we can’t still work out and have a good nutritional plan. But with such uncertainty, a lot of us will need to be a bit more strategic.

So, we have to do the absolute best we can to use our knowledge and will-power to keep fit and not let ourselves get out of shape. Well, a few days ago, Dexter Jackson, who by the way, is the winningest bodybuilder ever and 2008 Mr. Olympia champion, shared one of his best recipes for times like these.

It was a simple meal consisting of chicken breast and rice but he added some seasonings and sauces as well. So this time he’s back with a part 2.

So Jackson started off by showing a few food items that he eats whether he’s dieting, in his off-season, or a few weeks out from a show. The meal consists of organic, wheat and gluten-free brown rice pasta, ground beef (you can use any meat or seafood of your choice though), and organic pasta sauce.

Here’s how he does it…

Jackson added a little oil to a heated pan to keep the pasta from sticking. Then he seasoned the beef with some seasoned salt. But you can add any seasonings you like. He then dumped the pasta into the boiling water and then sprayed a separate pan with cooking spray before placing the beef in, of which he then broke it up to brown it.

Next, he transferred the beef into a bowl and then strained the pasta. He took some sauce out which he usually mixes in and explained that he doesn’t cut out sodium so he can have the sauce anytime because it doesn’t have much fat or anything else. So while he heated up the pasta sauce, he weighed his food, measuring out 6-7 ounces of beef (same for other meat) which is specific to his goals. You’ll need to measure out an amount that is relative to your protein requirements.

As for the pasta, it’s the same thing. He eats about 1 1/2 cups (70 grams of carbs) but explained that everyone will need a different amount based on their goals. Mix it all together and you have a tasty meal that’s healthier than your typical pasta.

Jackson mentioned again how you can eat this meal while on a diet as the pasta isn’t actually made from wheat.

“So yes, you can eat this when you’re dieting. Like I said before this pasta is made out of brown rice and it really tastes like pasts it’s amazing“.

He ended with, “Once again, this meal is to help keep you from putting on the extra weight, the fat or what have you. Because a lot of us sit our tail at home and eat unhealthy. I want to teach you guys how to eat healthy and not put on extra weight because we can’t go to the gym or we can’t do cardio right now.”

Back at it again with my quarantine cooking part 2! After the first video you guys asked me to do another one. Here’s another one of my meals that I enjoy eating during offseason or contest prepping. I’ll do a video a week but you guys chime in and let me know if there’s anything you want Chef Blade to cook. 😬 Let’s chop it up together and #stayhome and #stayhealthy!“

Dexter Jackson says he’ll do a video a week but he wants fans to let him know what they want to see him cook next!

Competitive bodybuilding demands a spartan lifestyle and everyday sacrifices that most of us can’t even think about making. Following a...

Reigning Bikini Olympia champion Jennifer Dorie is set to defend her throne at the upcoming 2022 Olympia, scheduled for Dec....