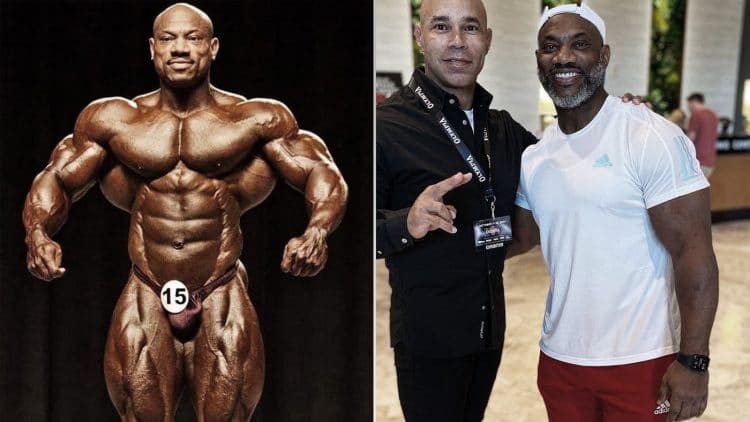 Retired IFBB Pro bodybuilder and 2008 Mr. Olympia champion Dexter Jackson has recently lost a significant amount of muscle mass and quite a lot of weight as a result. Jackson retired from professional bodybuilding following a 9th place finish at Mr. Olympia 2020 and has no intentions of returning to the competition. Until a few months back, Jackson maintained his beastly physique in retirement. However, he seems to have switched things up recently.

Having competed for almost three decades, Dexter Jackson holds the distinction for winning most professional bodybuilding titles (29) than any other competitor in the history of the sport. His decision to downsize following retirement is a welcome move and we wish to see more bodybuilders take the same route. Jackson posted his recent photo on Instagram with fellow bodybuilding legend Kevin Levrone where he looks lean and healthy.

“#tbt #throwbackthursday to the Olympia. Chillin with one of my biggest inspiration big bro @kevinlevrone We looking good retired big bro!,” Dexter Jackson wrote in the caption of his post.

Dexter Jackson recently joined hands with Hidetada Yamagishi, ten-time Ms. Olympia winner Iris Kyle to train at the Powerhouse gym in Las Vegas. He shared the video and photos of his training session with the duo on his Instagram account where his transformed physique caught the eye.

Why we should celebrate bodybuilders downsizing after retirement?

We all have a tendency to associate our favorite bodybuilders with their on-stage physique and expect them to be their athletic best at all times. However, the bodybuilding community needs to celebrate the bodybuilders that take a step back after walking away from the competition.

An important factor to understand is that building muscle, working out, and being involved in any type of physical activity is good for longevity when the whole purpose is to stay fit and lead a healthy life. On the other hand, performance and longevity stop being collinear when a person puts his body through rigorous training, diet, and strenuous routine in the competitive sphere for decades.

Bodybuilders need to consume a massive amount of food to sustain the muscle mass required to achieve competitive success. However, at this stage, carrying the muscle mass and maintaining the diet is absolutely unnecessary for Dexter Jackson. Naturally, body function starts to decline when a person crosses over 50. Therefore the approach to health and fitness needs to change accordingly.

For instance, Dexter Jackson has won Mr. Olympia one time, Arnold Classic five times, and holds the distinction for winning the most bodybuilding competitions. At 52 years of age, obsessing with muscle mass and appearance would not bring more success to Jackson.

To conclude, living a healthy life post-retirement should be the sole focus of bodybuilders and athletes from any sport. Dexter Jackson has set a positive example in that direction and Fitness Volt congratulates him for that.