Dwayne Johnson responds to the viral photos of Lt. Eric Fields, who looks just like him 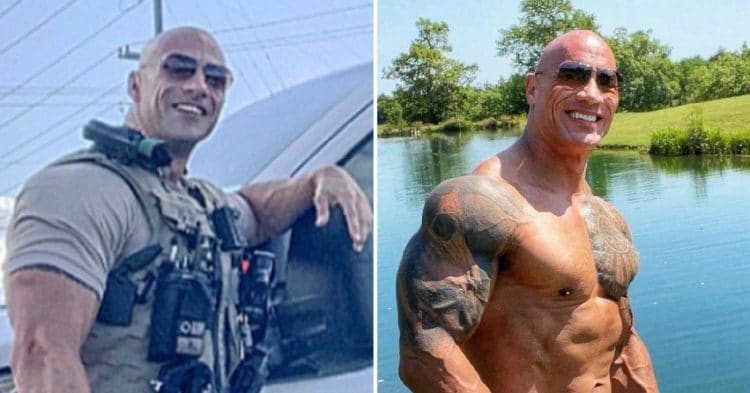 They say that statistically speaking, each person has six doppelgangers in the world at any point. Dwayne Johnson found one of his in the form of Alabama police lieutenant Eric Fields, who’s pictures have been going viral for how similar his appearance is to the pro wrestling superstar.

It is hard to imagine anyone looking like Dwayne “The Rock” Johnson, given his enormous build and massive physique. In fact, if you were to see just a silhouette of him, chances are you would be able to figure out who it was on your first try, simply because of the size of the WWE star, Hollywood icon, and future super hero.

However it is relatively easy to be fooled if instead you were looking at police Lt. Eric Fields, who bares a striking resemblance to The Rock, not just in his face, but with the size of his physique, as well having similar tattoo choices. His Instagram photos have been going viral with people noting his resemblance to The Rock, or some even saying he looks like the love child of Dwayne and fellow Fast and Furious star Vin Diesel.

Eric Fields went so viral in fact, that he even got the attention of Dwayne Johnson himself. Of course, to the surprise of nobody who has ever had an interaction with the Rock, he took the whole situation with a jovial attitude.

Posting to Twitter, Dwayne shared a side by side photo of he and Eric, perfectly demonstrating their resemblance. Here he praised Fields for serving and putting himself on the line by being a police officer, and even said he hoped to meet the man so that he can hear stories about how people have likely mistaken him for the actual megastar.

Guy on the left is way cooler,” Johnson wrote.

“Stay safe brother and thank you for your service. One day we’ll drink @Teremana and I need to hear all your “Rock stories” because I KNOW you got ‘em 😂😈👊🏾🥃 “

Oh shit! Wow.
Guy on the left is way cooler.
Stay safe brother and thank you for your service. One day we’ll drink @Teremana and I need to hear all your “Rock stories” because I KNOW you got ‘em 😂😈👊🏾🥃 #ericfields https://t.co/G38tOr68cW

It is great to see Dwayne Johnson take this whole thing in stride, even though it is almost certain that he has probably never encountered a man who actually bares a resemblance to his freakish physique. It would definitely be cool to see these two get together at some point, and maybe have Eric Fields be his stunt double in a future movie, if that is something that interests him.