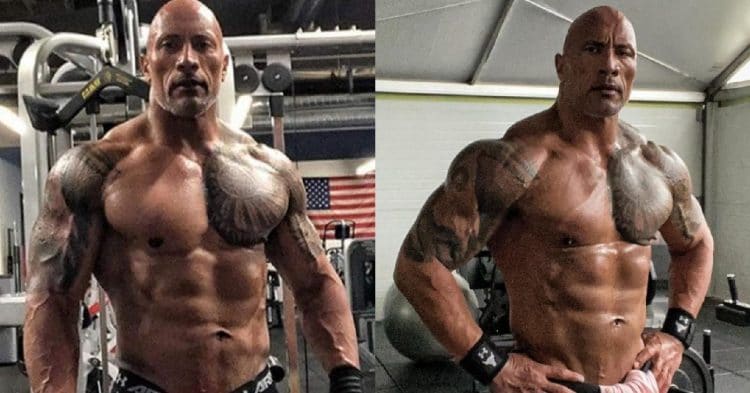 As much as Dwayne Johnson has one of the best physiques in Hollywood, his abs are not as crazy as you might expect. Recently the WWE and Hollywood megastar revealed that an injury is what caused his midsection to look the way it does.

As he has shown time and again, Johnson is absolute specimen of an athlete. He has used his enormous figure to become one of the most recognizable and popular men thay has ever lived, through his work in the ring and on the big screen.

Recently, to promote his latest movie Jungle Cruise, The Rock and co-star Emily Blunt did a video with WIRED, where the answered the most googled questions about themselves. When asked why his abs were messed up, Dwayne initially laughed off the question before explaining that an injury led to his midsection not being as good as it could be.

“That’s f—ked up,” Johnson said with a laugh. “There’s nothing wrong with them. I think because on Instagram, all these Instagram fitness models have these incredible six, eight, twelve, twenty-four pack stomachs. No, I got like a five and a half pack, sometimes a four and a half pack.

“The problem was, and a lot of people don’t know this, in a wrestling match, I tore the top of my quad off my pelvis. It went bang in a wrestling match, and then what that did was it caused a chain reaction, and it tore my abdomen wall. So then I had to do triple-hernia emergency surgery of a tear, a tear, and a tear… So they’re not like perfect abs.”

As much as Dwayne Johnson may not have “Instagram model worthy” abs, the rest of his physique is beyond that. In fact, the last few months have seen him take his already awesome frame and make it worthy of being a super hero.

The Rock has been working to portray the titular character in the upcoming Black Adam film, set for release next year. During this movie, particularly during the end of the filming process, he has gotten to the point where he was rocking the most shredded physique of his entire career.

Six pack abs or not, it is impossible to deny that Dwayne Johnson is one of the most athletic action stars in recent years. The fact that his midsection looks the way it does as a result of an injury he suffered while wrestling years ago, makes it not something that is within his control, and he should not feel bad or self conscious over something he has no say in, so it is good to see him laugh it off.