Eddie Hall reacts to Hafthor Bjornsson's exhibition boxing match ahead of their professional fight, and he was not impressed 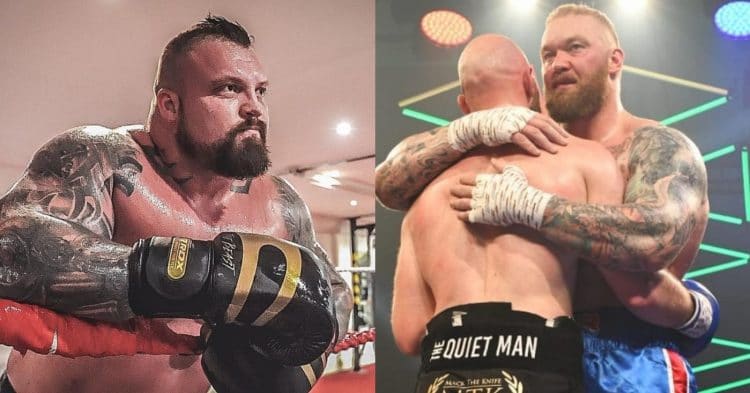 To prepare for his pro boxing match with Eddie Hall, Hafthor Bjornsson recently found himself doing an exhibition boxing match. Now The Beast reacts to his rival’s fight, and it is safe to say he was not impressed with what he saw.

The rivalry between Hall and Bjornsson started on the strongman fields, but has since moved outside of that sport, and into another. After taking the world record deadlift from Eddie, Thor agreed to box the British strongman this September.

Since agreeing to this fight, both men have been training their tails off to get used to the idea of boxing. They have each gotten in the best shape of their lives, with individual weight loss journeys to show for it.

Recently, Hafthor decided to take an exhibition boxing match, in an attempt to get his feet wet in the ring. Ahead of the fight, he took aim at Eddie Hall for not doing the same thing.

In the end, the bout between Thor and Steven Ward would end in a draw, as Eddie and a ton of people watched worldwide. However The Beast was not impressed with Thor’s performance, as he made clear in a video to his YouTube channel.

“I watched it, of course I watched it. I’d be an idiot not to watch it,” Hall explained.

“Let me tell you what the funniest thing was, the commentators, all the way through, gobbled him off. They told him good he was, how good his footwork was, how good his defenses, his attack, fitness everything.

“Do you want the god’s honest truth? He didn’t land a single f—king punch in three rounds. So anyone with any boxing tenacity about them will know that was the probably the biggest load of s—t that’s ever happened in boxing.”

From there, Hall went on to say that Steven Ward must have taken things easy on Thor, because the strongman did not land any clean shots. Still, he wanted to thank Bjornsson for giving him an idea of what to expect.

“I want to say big thank you to Thor for doing that match, and putting it out on the internet, because it’s literally given me probably the best advantage I’ve ever had,” Hall said.

“I can see Thor’s flaws six, seven months out from the fight, and that’s what we’re going to be working on. And he ain’t going to improve that much in seven months, so thanks Thor.

Who do you think will win between Hafthor Bjornsson and Eddie Hall? Do you think that exhibition helped or hurt Thor’s chances?