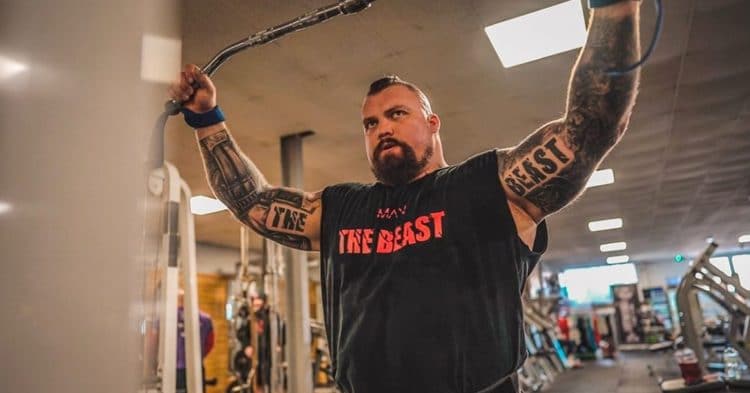 Despite having most of the country reopened, the United Kingdom has still not allowed people to return to fitness centers. Eddie Hall is fed up with this, and has decided to do his part to try to get gyms reopened in the area.

Athletes losing the ability to go to the gym has been one of the biggest areas hit by the global health crisis. It resulted in several gym chains filing for bankruptcy, while other smaller gyms struggled too. However as things have begun to calm down throughout the world, many locations have reopened their fitness centers, albeit with some heightened safety protocols.

One place which has yet to reopen gyms is the United Kingdom, who has allowed other facilities to open their doors to the public. This is something that has really bothered World’s Strongest Man winner Eddie Hall, who took to his Instagram to plead with officials to let people go back to the gym. In an open letter to the MP’s of Parliament, he cites how the gym is often an outlet for those struggling with mental health, saying that if pubs can be open, fitness centers should be too.

“Health, fitness and exercise is my life.” Eddie Hall said.

“Today I’m one on the lucky ones; winning the World’s Strongest Man title has given me a high public profile and opened doors of opportunity which mean I now have the luxury of being able to train these days using my own gym equipment, in my own home.

But it wasn’t always that way.

I’ve spoken open and honestly about how, when I was a teenager, I suffered from anxiety and depression – turning to drugs and alcohol and getting expelled from school.

I would lock myself in my room for months on end, and at my lowest point would even contemplate trying to kill myself.

Exercise and fitness became my passion. My distraction. My drive. My outlet. My reason to carry on…. My saviour.

My happiest memories as a child revolve around visits to local swimming pools, and I practically lived at the local gym throughout my teens and early adult life.

I discovered that visiting the gym allowed me to release my endorphins and give me a feeling of self-worth.

Where would I be without all of that? To be honest, I don’t really want to contemplate

Because often you never truly cure mental health problems; you just find ways of managing them.

Millions of British people have been using visits to their local gym for exactly the same propose, releasing pent-up frustration and pressure, and giving them a motivation to face the future in the best possible health.

But while the vast majority of the UK has now been permitted to release the lockdown, the Government continues to deny gyms and pools the chance to do the same.

This is the same Govemment which is quite is happy to reopen pubs across England on July 4th, giving people the license to drink themselves into oblivion.

The message? That it’s far more important to be allowed to drink alcohol to excess, than it is to indulge in exercise which benefits physical and mental health.

In other words, pub visits will inevitably put more strain on the NHS accident and emergency departments have gotten the green light, while health and fitness centers which help to lift the burden off the health services remain off limits.

We’re told that pubs and restaurants simply have to reopen for the sake of the economy. And yes, of course it’s vital to do all we can to protect people’s jobs during the difficult time.

But the exact same argument can be levelled at the health and fitness industry, which independent figures show is now worth more than £5 billion to the UK economy, with one in seven people now a member of some form of gym or leisure club.

So I’m appealing to you all to act now, and right this injustice.

If it has been accepted that there is a way for pubs to reopen with suitable precautions in place, then indoor gyms and pools can surely do the same thing?

In fact, it’s far easier to control social distancing in one of these vast 60,000 sq ft-plus gyms with modern ventilation systems and a ready-made system for signing in and out, than it is for a traditional town centre pub to keep inebriated people apart in their cramped bars and corridors?

Health, fitness and exercise saved my life. Please do the responsible thing and give our gyms and pools a level playing field, so that they can provide the same vital lifeline to others.

We’re not asking for preferential treatment or favouritism. Just equality.”

These are some moving words from Eddie Hall, who is clearly quite passionate about this issue. He has a fair point about other facilities being allowed to reopen. We have seen some pretty crazy safety measures in place at gyms that have opened back up, so it is reasonable to assume the UK could find a middle ground.