Eddie Hall takes his fans on a tour of his basement gym, which includes a full-fledged recovery center 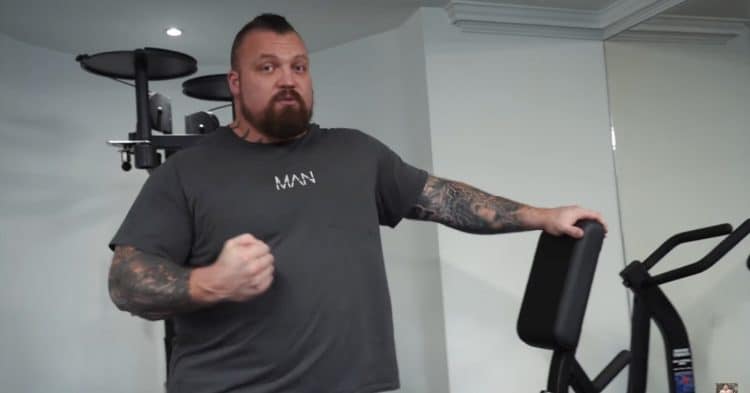 The lockdown in the UK has had a massive effect on those who regularly go to the gym. Eddie Hall has decided to take matters into his own hands, as he has crafted an epic home gym for himself, in his basement.

Over the last year or so, Hall has been somewhat outspoken on his dislike for the way that the United Kingdom’s government has handled this pandemic. He expressed frustration with the fact that fitness centers were being treated as less important than other businesses.

All things considered though, he has been able to keep up with his training for the most part. As he switches from strongman training to boxing training, he has consistently worked out, and has even lost a ton of weight.

However with lockdowns tightening back up in England, Eddie Hall decided to take matters into his own hands. He built a sleek home gym in his basement, and decided to take his fans on a tour through a video he posted to YouTube.

“Lockdown in the UK has meant gyms have been shut pretty much solidly since March 2020,” Hall said.

“So we’re a year on, most people haven’t had a gym to train in. I’ve been super, super lucky to have this in place.”

Eddie Hall starts the tour off in the weight room of the basement. Here, you can see a variety of different equipment, ranging from dumbbells to kettlebells, and other traditional weight training equipment that you are likely to see a strongman use.

In addition to that, he also has some more unique pieces of equipment that he uses. He showed off the westside barbell reverse hyper, which he likes to use for recovery, as well as a contraption that hands him dumbbells and puts them away.

Next Hall shows off the room he has set up for cardio training, which includes a rowing machine, bike, and plenty of other goodies to get the heart racing. He then brings fans into his recovery room, which is the crown jewel of this basement gym.

“This is probably a better setup than any football club in the world,” he explained. “There’s every bit of recovery kit you’d ever need in this room.

Sure enough, there is virtually every type of recovery equipment imaginable in this room. He has the typical cryotherapy machine and massage guns, but also an infrared therapy machine, which he says provides him great results.

After this, Eddie Hall moves into the boxing room, which contains a full-size ring. However unlike the ring that he will be in when he faces Hafthor Bjornsson this September, he designed this to not have springs in it, in order to make his training more difficult.

To cap it all off, Eddie reveals the backyard, where he is working to build a spa. When it is finished, he says it will have a pool, hot tub, sauna, and sun bed, so that he can create the perfect environment for his training, all from the comfort of his home.

We have seen some impressive home gyms before, but all in all, this is a pretty incredible setup from Eddie Hall. He has put enough time, energy, thought, and money into this so that he will never need a public gym again.