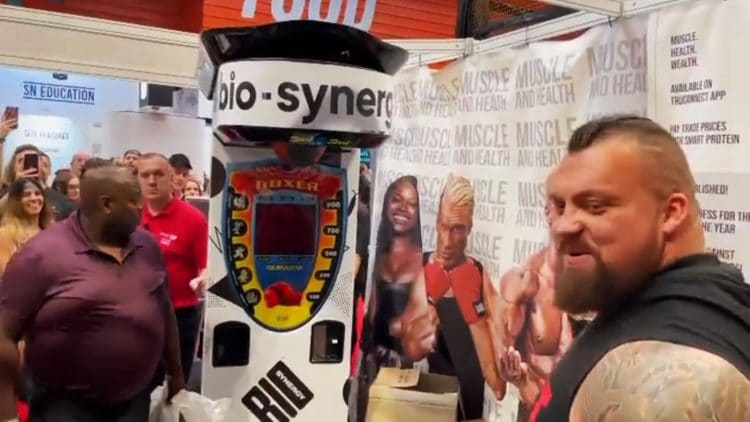 Power is an attribute that nature bestows upon you. You either have it or you don’t. Strongman Eddie Hall proved that last weekend in Birmingham. At the first-ever Arnold Sports Festival UK, Eddie Hall tested his striking power against a punching machine. The device determines power in numeric units. Soon after Hall landed the big shot on the machine’s punching bag and the numbers started climbing, it suddenly shut down!

UFC Heavyweight champion Francis Ngannou holds the record for the most powerful punch ever recorded. However, Ngannou’s power was tested against a different device called the PowerKube. Eddie Hall tried to break Ngannou’s record back in June on the same device. Although he could not match The Predator’s freakish power, The Beast came dangerously close.

Hall punched the machine installed at the Bio-Synergy stand. It was similar to the one that tested Heavyweight boxers Anthony Joshua and Deontay Wilder’s power. Back in 2017, AJ broke the machine’s record of 787 points and scored 848. Wilder left Joshua behind by a significant margin and scored an insane 927 points when the numbers stopped climbing. Interestingly, The Bronze Bomber threw a punch with his non-dominant hand as he was dealing with an injury to his right hand.

The extent of Hall’s punch punching power will remain a mystery until he has another go at the machine. However, judging by his previous attempt, there is room to believe it will be mighty high. Synergy Box posted the video of Hall’s feat on their official Twitter handle. Courtesy to them, you can watch Eddie Hall punch the life out of the machine here:

Eddie Hall was expected to fight archrival Hafthor Bjornsson in a much-anticipated boxing match on September 18, 2021. A training-related bicep injury forced Eddie Hall out of the fight. The Beast underwent surgery to repair the bicep tear. He is still in the recovery process but has resumed training.

Eager to stay active in the fight game, Hafthor Bjornsson accepted a replacement opponent in Arm Wrestling ace Devon Larratt and won the fight via first-round knockout. However, Hall vs Bjornsson fight is still one of the most anticipated boxing matches.

Hafthor Bjornsson recently stated that he believes Eddie Hall is faking injuries to avoid the fight. Thor used the mic to promote his fight against Eddie Hall immediately after knocking out Devon Larratt and predicted a finish the Brit when the fight eventually happens.

“I know Eddie is at home chilling on the sofa with his popcorn and cola. Enjoy your life buddy, I’m going to knock you out soon.” Hafthor Bjornsson said.

Eddie hall had a similar thing to say about Hafthor Bjornsson during his interview with Strongman Luke Fullbrook. Agitated by Hafthor Bjornsson’s repeated callouts, Eddie hall promised that he will let his fists do the talking and promised a knockout win over Thor.

“I’m just going to let my fists do the talking. He can say or do whatever he wants, but at the end of the day I’m going to knock him out.

Judging by Hafthor Bjornsson’s performance against Larratt and Eddie Hall’s ‘machine breaking’ punch at Arnold Fest, it is safe to assume that the punches will talk a lot louder than the words. All it remains to be seen is whose punches will make the most impact.