Breon Ansley gave a sneak peek of his package at the 2021 Olympia press conference, but reigning champ Chris Bumstead was not impressed 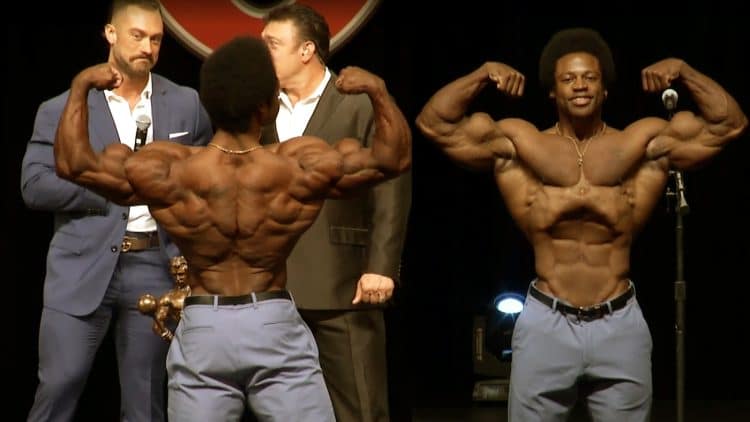 The 2021 Mr. Olympia goes down October 7th-10th, in Orlando, Florida. At the press conference before the event, things got heated between two-time Classic Physique champ Chris Bumstead, and former champ Breon Ansley.

Bumstead and Ansley have been rivals for a long time, with both men beating the other in the past, and each one winning the Classic Physique Olympia. Last year, things got intense onstage, with the two bumping elbows and fighting for lead position while posing next to each other.

This year, the heat got turned up before the contest even began, with Chris and Breon, as well as 2020 runner-up Terrence Ruffin, faced off on stage at the press conference. However things got interesting when Breon Ansley took off his shirt, to give a preview of his physique, mere hours before taking the stage.

Despite the fact that this was a bold move from the former champ, neither Chris Bumstead nor Terrence Ruffin were impressed. While standing onstage, Chris made it clear that this was not something that he needed to do, because he had nothing to prove.

“He’s got a lot to prove. If he needs to prove it, lets see him prove it… It kind of looks like last year. I don’t see any difference,” Bumstead said.

“Let’s do Terrence versus Breon. If they want to do their little battle, they can do it today… (He has) no chance. No.”

It seems like the battle between Chris Bumstead and Breon Ansley is going to be just as intense at the 2021 Mr. Olympia, as it was when they faced off last year. This was an insane display of confidence from the former champ, to show off part of his physique before the contest even begins.

That being said, just because he is confident, does not mean that he is going to win this year. After all, Breon had all the confidence in the world last year, but that did not stop him from dropping to third place, coming behind Terrence Ruffin who adds another layer of excitement to this jam packed contest.

Regardless of the antics at the press conference, things will be decided when Chris Bumstead, Breon Ansley, Terrence Ruffin, and the others take the stage at the 2021 Mr. Olympia. It is going to be exciting to see who wins, at the end of this massive weekend of bodybuilding action.